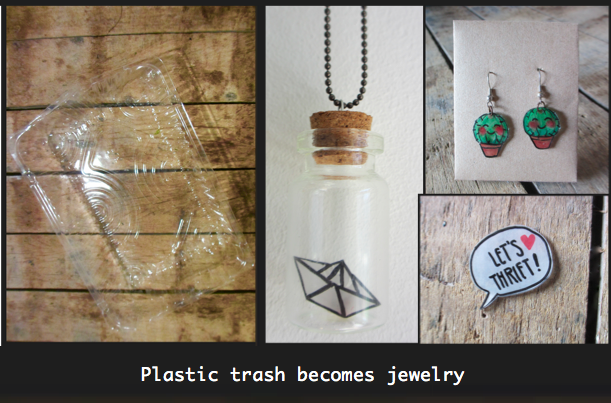 I pride myself for making things out of trash. Thing is, usually the materials I use are not exactly trash. Tacky, old and unloved maybe... but if you can still find it in a thrift shop, it's not trash, is it?

Well, today that is going to change: I'm going to make jewelry from plastic that I actually saved form my garbage bin. Yucky, you say?
No!!
Behold the magic of shrinking plastic!!

I vaguely remember playing with shrinking plastic (or shrinky-dink as it was named) as a child. I more vividly remember shrinky dink because my mother had a saying that went something like this: "And then X completely ignored what I had said, and I really felt like a shrinky dinky"  meaning that a situation or a person made you feel as if suddenly shrunk to an insignificantly small size. Quite a creative analogy, isn't it? I have certainly felt like shrinky dinky quite a few times in my life.

For those of you who are still raising your eyebrow over the previous paragraph, wondering what the heck I am talking about: Shrink plastic, or shrinky dinky is plastic that you buy in sheets. You can cut different shapes, color them, and when you heat it in the oven, it shrinks about ten times its original size, and grows ten times in thickness. This way you can make cool little gadgets for all sorts of use.

Shrinking plastic is quite expensive, but did you know you can actually find it in your garbage? No? Well now is a good time to find out!

What you need is type 6 plastic (polystyrene). That means that is has this logo on the bottom: 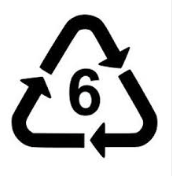 A quick search in my own stock learned that type 6 plastic is mainly used for fruits and salads. I used the packaging of a salad.

I began by simply cutting a test piece. I sanded it on one side and colored that side with sharpies.

When you're done, heat them in the oven as follows:


And.. does it work?
I found out that all the ridges of the package simply flattened out while heating, so it didn't really matter that my initial plastic wasn't completely flat ( Although the flat pieces are the easiest to draw on)

Here's some of my designs!

I found that earrings were the nicest to make, since it doesn't require a lot of material.

The plastic shrinks approximately 3 times in both directions, I didn't really bother with measuring, but you could of course make a sort of ruler to measure the shrinking. 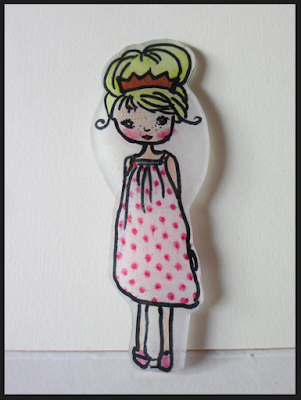 This little girl was one of the bigger pieces that I made. Although the picture doesn't really show it, she's not completely flat, since I was not quick enough to press her flat. I wouldn't put too many pieces in the oven at once; you won't be able to flatten them all in time.

I really liked the idea of putting a small boat in a bottle, since I wear my bottle-necklace a lot. The bottle was once filled with beads, and A while ago I attached it with a little hook to a long necklace. I put varying things into the bottle: dandelion-seeds, dried flowers, small toys or a little note... It's like a really small, wearable museum :) And I thought an origami-boat would look lovely in it :)

Unfortunately, since I didn't bother with measuring, it actually took me three attempts before I made one that actually fitted in the bottle. So, if anyone wants to have some some plastic origami-boats, you may have them ;)

I have to be honest: I did have a few less successful attempts during the process: pieces that completely rolled up during the heating, and where I wasn't quick enough to press them down. But as I was experimenting with trash anyway, I wasn't really bothered.

So, if you're looking for a little project to cut down your waste and be able to get some cool jewelry at the same time, you should really give this one a try!

Did you like this project? Ever tried shrinking plastic yourself, and if so: what were your own results?
I'm curious to hear from you!

Posted by adventures of making at 9:15 PM