"Oh my, is that a Rembrandt on your bag?" Needlepoint becomes shopper bag! 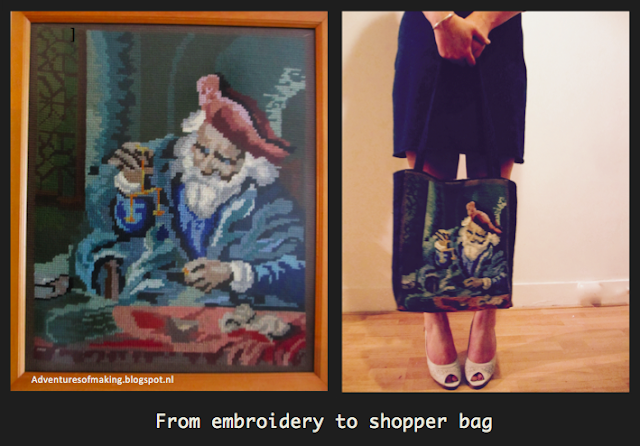 "Are you sure about that one?" the cashier of the thrift store said, raising one eyebrow while looking skeptically at the items that I was buying. She wasn't talking about the sweet pair of high heels (new! can you believe my luck?) or the couple of storage cans I wanted to buy. No, the reason for her eye-brow action was a framed embroidered artwork, depicting some medieval, bearded man doing whatever bearded medieval men usually do. By the look of it, it had been in the thrift shop for ages. I could feel the hesitation of the cashier: the thing was incredibly ugly. But I bought it nevertheless. Was I out of my mind? Maybe, but I had great plans for it: making a shopper bag!


The idea came to me earlier that day when I was considered to paint something on an old messenger bag that I never used. And on the topic of painting on a bag, my mind began to wander. Painting... bags... Could you also make a bag out of a painting? As you can image, I decided that I had to go to a thrift shop to find out. And there I found something even better than the canvas I was looking for: a piece of embroidery!
And thus I spend my evening making a bag out of it. Here's what I did.

- a piece of embroidery ( edit: today I learned it is actually needlepoint instead of embroidery, a difference we don't make in the Netherlands ;) so wherever I write 'embroidery' just read 'needlepoint' okay? )

- some denim fabric
- some fabric for the lining
- sewing equipment 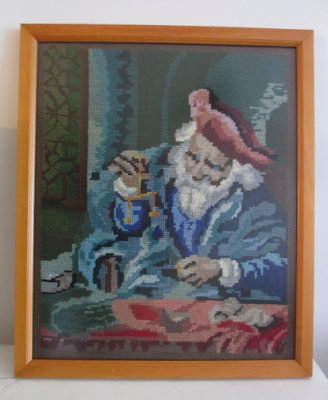 First, I took the embroidery out of the frame. I figured that I needed some extra fabric to actually make the bag, so I looked in my stash until I found a big piece of denim fabric that once was the cover of an ottoman. 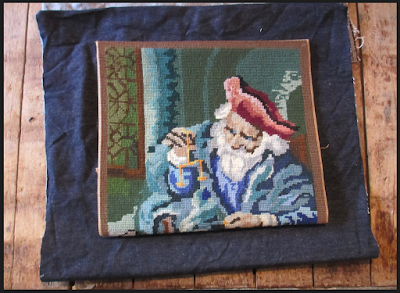 I traced the measurements of the embroidery onto the denim, And cut the denim around it, leaving around 5 cm on each side(which necessary to give it sides and a bottom). What I did next was basically making the shopper bag that I made in this post, so you can follow the exact instructions from this post if you'd like to.

Since urban girls also require to some straps to casually swing their bags over their shoulder as they're strutting along, I also cut some denim strips and folded the edges inside to make some straps.

The last step was placing the lining into the bag. I folded the top edges inside and pinned them, and made sure to also pin the straps in between them. By sewing everything together my shopper bag was finished. This is how it looks. 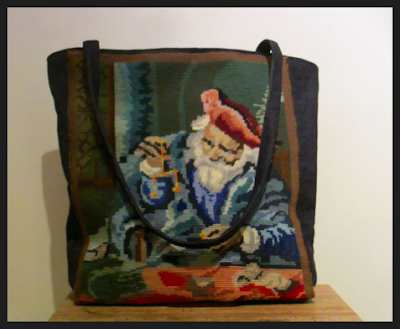 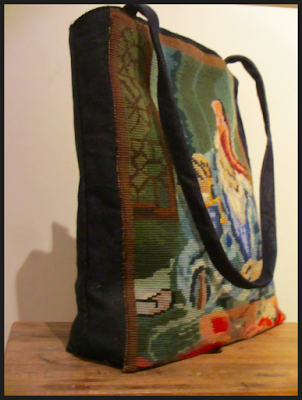 I'm quite proud of this project! I mean, who doesn't want to walk around with a piece of art (I'm generous with my titles today) on its bag?  Casually swinging your art on your shoulder when going to work,  going to the market and say: "Oh I don't need a plastic bag, I just put these apples into my painting"? Scaring thieves away with the judgmental look of the old man? I'm sold! 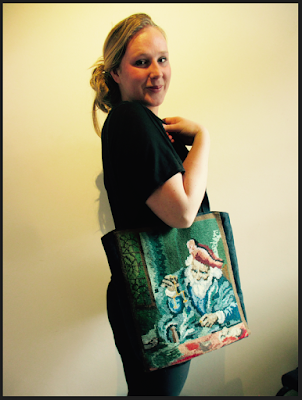 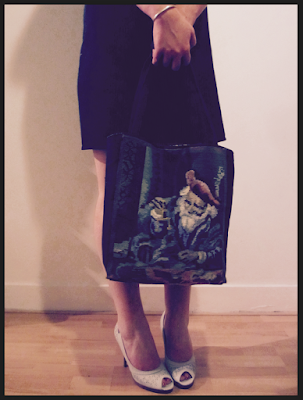 I really enjoyed the art/sewing combination. I'm planning to do a few more of these things in the near future. Maybe with a real canvas painting this time? And maybe make a purse instead of a shopper bag? I'll keep you updated! In the meantime, please let me know what you think of it! 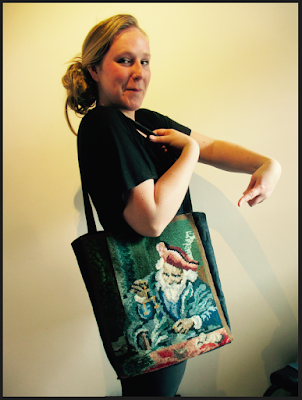 cheers!
Posted by adventures of making at 10:37 AM