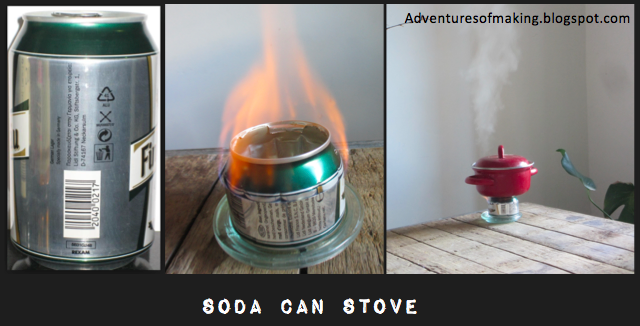 Behold one of my all-time favorite upcycling crafts!!

I'm a pretty big fan of camping. Not just any camping, no the wild camping, survivalling kind of camping, where your ass freezes off, and your idea of luxury is a pair of clean socks. ( Hey, I live in the Netherlands, our most dangerous animal is the honey bee... I need some adventure in my life!)


Love those memories!!
Sounds like hell, you say? Well, don't worry yet: although today's craft might be veerry handy if you have a hobby like mine, but it works very well in the luxury of your porch/backyard/beach/at your BBQ. Because this is what I'll be making today: a stove made from a soda can (okay... beer can, but soda sounds nicer!)

- some protection for your hands might be a good idea, since the cans are quite sharp.
- an ID that states that you're adult enough to handle crafts that include open fire, sharp materials and (possibly) alcoholic beverages ;)

I hope you'll find my instructions to be clear, if not.. this idea can be found on several places on the internet, so you might find some youtube clips to clarify things!

Start by drinking your beverage.
Take a sharp knife and start cutting the top from your can. ( might take some muscle and a strong knife)
Cut round until the top is completely removed like so:

after that, cut the can in half. 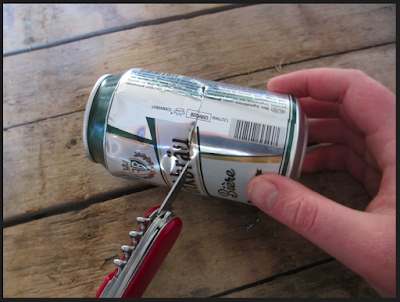 take the bottom half, measure about 3 cm from the edge, and cut it.

So far, this craft isn't too hard right? When I made this stove for the first time, I really didn't believe how easy it was to make something as technical-sounding as a stove!

Now, it is time to measure how much you've got to take of the top part. Hold the edges(ridges) of the top and bottom part next to each other.
Now the top part needs to be about 2 or 3 mm longer than the bottom part. In the picture you can see where I have drawn a green line on the can. 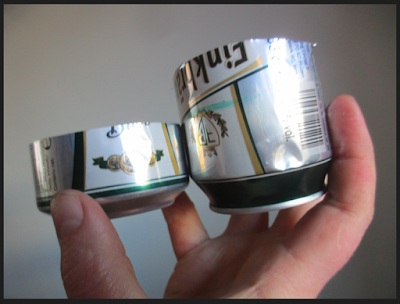 cut the top part at this height.

The top part is going to need vertical ridges, that allow the fuel to travel upwards.
You make them by taking your top part, and place two fingers on the inside of the edge, like so: 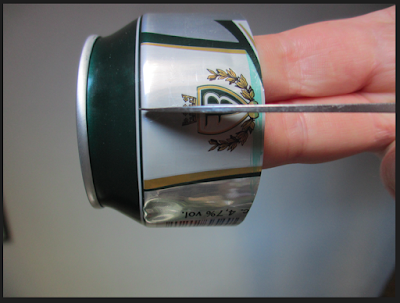 run with a knife between your fingers over the outside of the can. The goal is not to make a cut, but to make a indentation. press your knife over the side, starting at the cut and running upto the curved edge (the edge itself also needs a small dent).

repeat this process all around the can. I keep about one finger in between the dents, since that's easy and creates quite a good distribution.

Use the point of your knife to make a small hole in the diagonal top part. this hole allows air to get in your stove once you've put a pan on top. 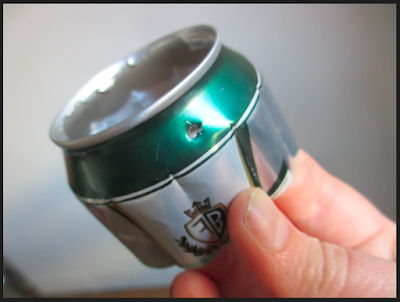 We're as good as finished!!

slide the top part into the bottom part. 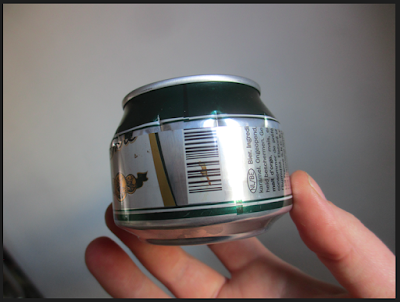 As you can see, the dents have created some sort of small holes, this is where the flames will be, resembling the holes in your kitchen stove.


Time to get the fire burning!
place your stove on a safe surface. Keep something like an empty, bigger can at hand, that you can place over the stove to stop the fire if you need to. (water also works, but cutting of air suplly is safer and not as messy)

Pour some rubbing alcohol in the stove. I usually pour about 1 or 1,5 cm in there, which is enough to keep it burning for at least 5 minutes. I'm not sure how well it works when you fill it further. 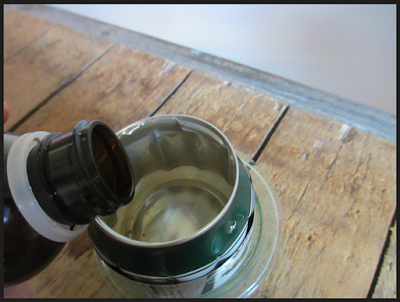 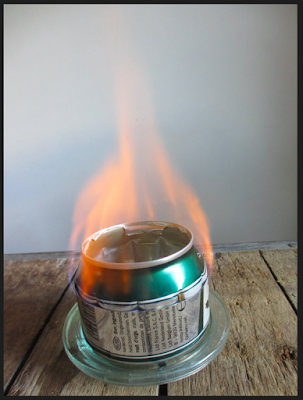 usually, the fire starts in the middle, but moves to the holes at the sides after a few seconds, as you can see on the picture. If not, placing a pan on top of it might do the trick. If that also doesn't work, your dents may be a bit too small (although I have once made one that just wouldn't work no matter what I did.. the rest worked perfectly though!). 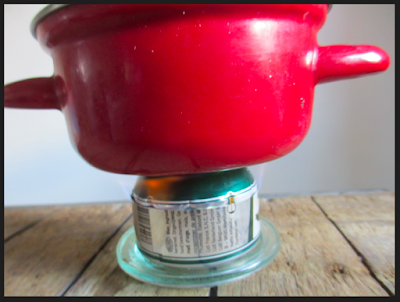 now you can simply place your pan on top of it! photographing the flames in the picture above was quite hard, because the thing burns quite hot, which means blue flames ( blue flames is good, as you may remember from high school science lessons!)

After just a few minutes, this was my result!


yep, boiling water, in no less time as it would have taken my kitchen stove. Isn't it amazing?

As I said before; this is such a neat thing, I really love it. It's lighter than any other camping stoves that I own, and it works just as well. I've made a few of them already (they make cool gifts for friends) and they usually turn out pretty great, although I once had one that just wouldn't burn properly. As I said before: try to make the dents slightly bigger ( or smaller if they are already big), and check it the alcohol reaches at least the bottom of the top part ( the entrance of the dents)

As an extra stove on a barbeque, as way to make fresh tea on your fancy picnic, to create a warm roadside snack during your road trip, or the way to create a warm meal when you're survivalling.. It's all possible! Would you use it, and if so, how?
Posted by adventures of making at 10:09 PM