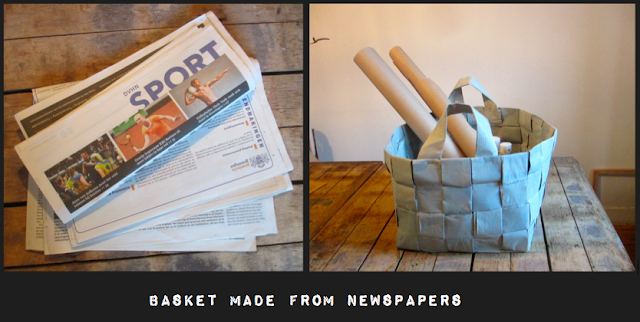 What do newspapers and green cats have to do with each other?

Well, that is unless your cat happens to be a MASSIVE idiot named Broen, who couldn't withstand a basket if his life depended on it. Yep, as you may have guessed by now, things are about to go tits up!

But before we get there, we have a recycling-craft to finish. And the material of today is...


Newspapers are a big part of my garbage. We already reduced the garbage by sharing our newspaper with our -incredibly cute- elderly neighbours, which means I'm always one or two days behind with the news, reading a newspaper that smells ever so slightly of menthol-cigarettes... But nevertheless, I'm still dealing with quite a lot of newspapers at the end of the month (to be honest, the waste-reduction is mainly on their side) so I felt that I could do something nice with them. Something like... a basket perhaps?


start with a sheet of newspaper, lay it in front of you and take a moment to appriciate the news of two days ago and the smell of menthol cigarettes ;) 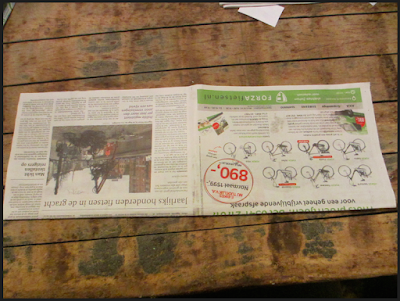 Start folding the newspaper over. Again and again until you end up with a strip that is a width that you like (in my case I folded 3 times)


Repeat that step until you'll end up with a good bunch of strips and start weaving them.


Then, I started on the sides!

just keep weaving around! when your strip isn't long enough, just lengthen it by folding a new strip, add some glue to the end, and tuck it within the end of the old strip.

When you've finished weaving all around your base, cut your strip to the right size, add some glue and tuck the strip away somewhere between the folds ( you'll see as you get there) 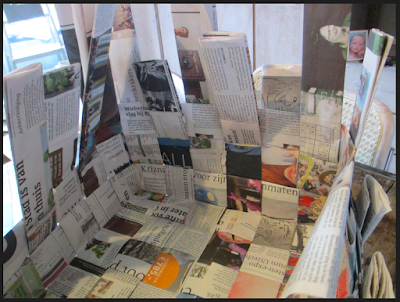 I kept adding more strips until my basket was around 30 cm heigh.

I dealt with the loose end on top by adding some glue, folding them over and tucking them in like so:

And I was -sort of- finished! This is what it looks like now: 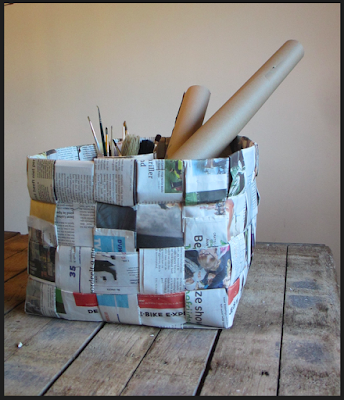 Quite cool! but still.... it's missing something..

And as you may have guessed, this is where things started to go tits up. because, yeah.. I decided to paint it.

Wait, didn't I say things were about to get wrong?

well, it did only after I finished the painting.
I was happy with the result. I was smug. I needed a break. I figured that I deserved some tea...

so, while the paint was still drying, I went to the kitchen to get some tea, leaving a freshly painted basket, and a basket-eager cat in one room......

As you may imagine, I returned to the room not only to find a green basket, but also a partially green cat in it, happily purring along and looking smug with smears of paint everywhere.

I may or may not have dropped my tea at this point. Did I mention that Broen really has A LOT of hair?

I would have taken pictures, and also I would have put him under the shower, but before I could catch him, the smug little bastard ran outside, where he is probably right now flaunting his furry green arse to one of his feline lady friends (I'm thanking my lucky stars that I used that kind of non-toxic school-paint).

So in short, the result of today is that I ended up with a really nice basket, and a really ugly cat !
But well, let's focus on the positive, so here's the basket! :) 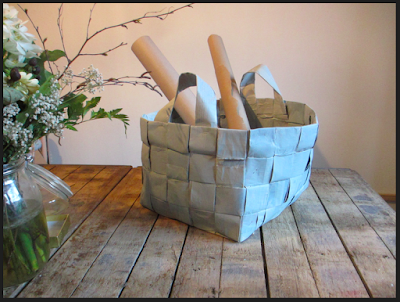 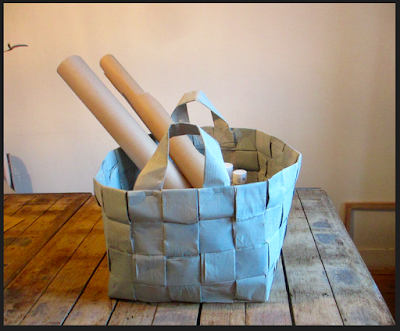 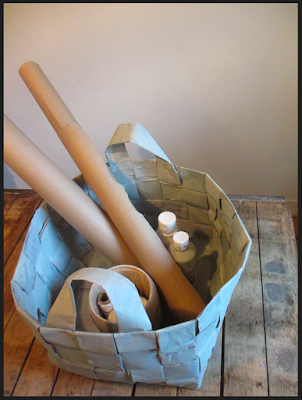 Costs/Resources:
- some tacks and glue
- paint
- a long shower for the aforementioned dimwitted Maine Coon.

Posted by adventures of making at 10:53 PM