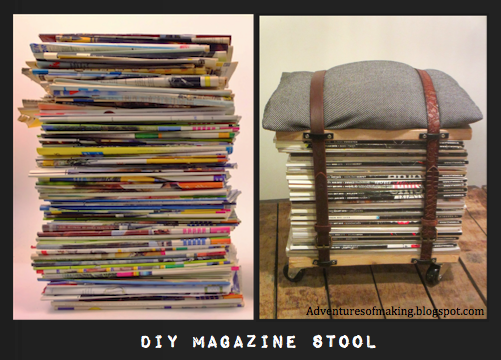 " So... What are you going to do with your magazines?" Joost asked while we were clearing our bookcase. "Do you really want to keep them all?"
Whoops. Joost was touching a sensitive point here: my addiction for home design magazines. I just love them. I especially love looking at the incredible expensive things in them and thinking: "I TOTALLY could make that myself!!"

That addiction has resulted in quite an impressive staple of magazines. I really cherish that moment of smugness ("you little fools, buying all these expensive things that you can make or thrift?"), so the magazines had to stay. But something had to be done, so -after a quite ingenious design I saw a few years ago- I decided to make a stool with them!


This is what I used:

- a proper stack of magazines ( or newspapers if you don't share my addiction)
- a piece of wood ( I used a spare piece of our bookcase)
- 2 (more or less the same) belts, and a narrow belt
- 4 small castor wheels

- short screws and a screwdriver
- a saw

I took the piece of wood and one magazine outside to saw the wood. 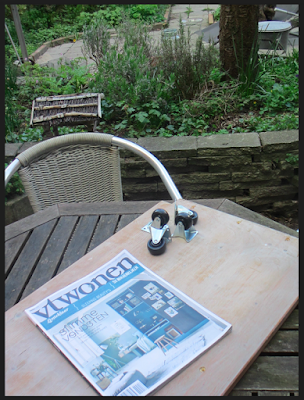 Using the magazine as the template, I cut two pieces of wood that were about the same size as the magazines (I made them 1cm bigger, but you don't have to)

After sanding the edges, I screwed on the castor wheels. 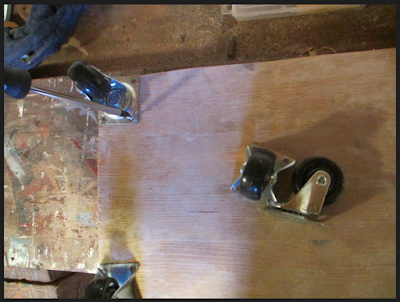 The nice weather suddenly turned into a vicious hailstorm, so me, my magazine and wood rushed inside to continue the project over there. Luckily the sanding was already finished, so I wouldn't cover the living room in sawdust.

So, I have two pieces of wood -one with wheels- and a staple of magazines. Time to put those things together! 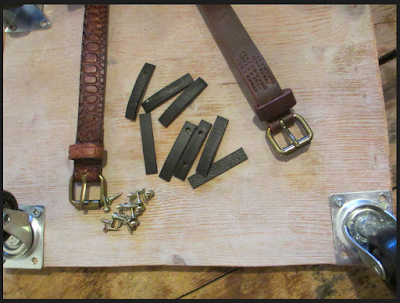 I scavenged my closed for some of unworn belts. Unfortunately I didn't have a pair, but I think those two brown ones are close enough. From a small black belt I cut 8 strips, 2 cm broader than the brown belts. These are screwed into place and used as loops for the belts.

When all black strips were into place, I started stacking all magazines onto the frame. 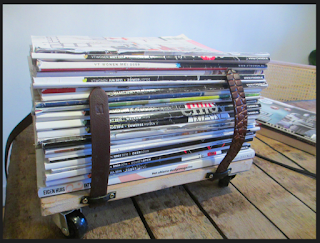 Once all magazines were stacked, I laced the belts around the whole stack, and through the loops. My staple was high enough to simply buckle the belt. 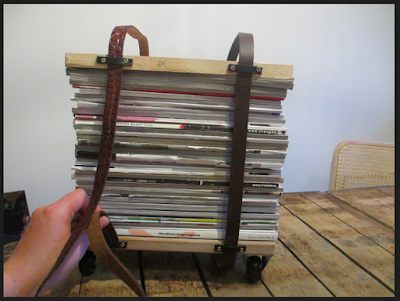 Looks quite good already! But I do think it's missing something.. Of course, a cushion!!
Luckily I had an old cushion That I didn't really like for the couch because it is very small and flat.

Using the magazine as a template, I cut the cover in the right size... 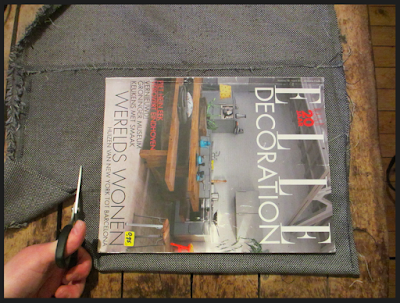 as well as the inner cushion

Some quick sewing took place to resize the cushion...

And the cover also went under the sewing machine: 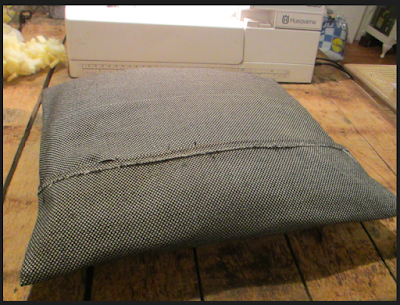 Then, I simply tucked the cushion underneath the belts, and my stool was ready!
Here it is: 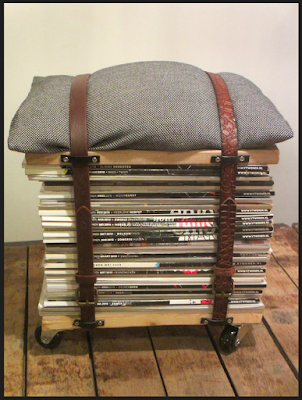 it took me a little more time than my previous projects this week ( about an hour), but I'm quite amazed with how well it turned out! The colors are quite nice together, and not as loud as I expected from a stack of magazines ( thank you, vtwonen, for the color scheme on your cover)! 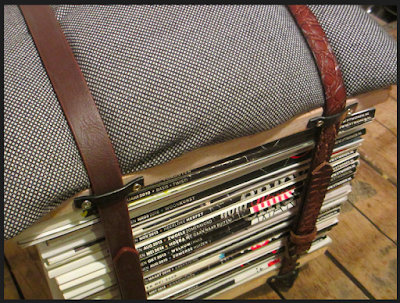 So, with this post I am concluding recycle week!! Although crafting and writing every day after work was a little exhausting, I really had a blast making these things, writing about it, and reading your lovely responses.

I hope you enjoyed it as well, and I hope that I may have made a small impact on some of you: making you reflect on the value of what we usually consider to be trash. So, did you enjoy this week? Has it inspired you to make some things for yourself? I'd love to hear about them!
Posted by adventures of making at 10:58 PM