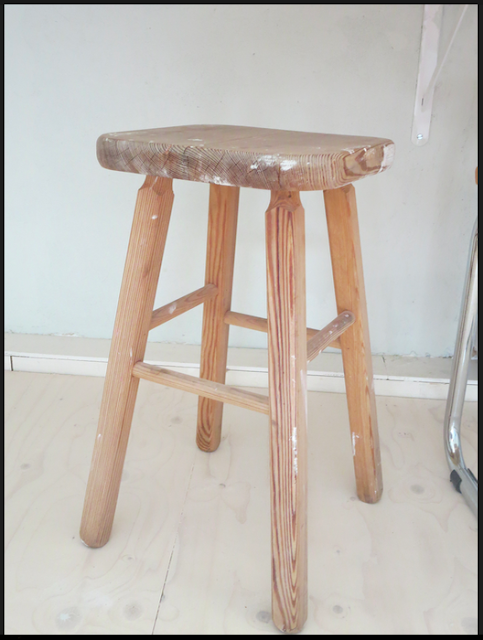 "Hi Joost and Marije! So, I'm gonna come by this weekend, and I really want to demolish something!"
That could only be one person: Joost's oldest friend Bram. He was ready to get the crowbars out!

I rubbed my nose, thinking about where to unleash this unlimited power. "A room upstairs maybe?" I offered "which one?" Joost asked. "Doesn't matter, really.. pick one" So both boys grabbed a crowbar and thundered upstairs, making quick work of our lowered ceilings.

In the morning the room looked more or less like this...

And only one hour later later - no exaggerating here- it looked like this:

How on earth is it possible that Joost, who takes an hour to eat breakfast, can demolish an entire room in one hour? Have I accidentally married a typhoon in human form?

Unfortunately, demolishing is usually quicker than rebuilding, and for more than 8 months, the study room looked like this:

In fact: it was even worse than this, as in this picture there was a light installed, and the (lack of) ceiling was cleaned of all the cobwebs. before that, it really was nightmare-stuff.
When I showed my oldest niece the room, she almost began to cry, no kidding.

Luckily, this spring we decided it was time to pick up the upstairs rooms again, beginning with a good bit of insulating.

Rather than reinstalling that frumpy lowered ceiling, we decided to get the old wooden beams back in sight. It took a lot of swearing -luckily we are experts in that- and measuring, because honestly, our house is more crooked than a mugger with a humpback. But we managed to get all the insulation and plasterboard in place!

Next step was a bit of flooring. We decided to get creative, and rather than buying a normal laminated floor, we went for a floor of underlayment (which is a type of plywood sheet of a certain thickness, used to build floors) It's much cheaper, and it worked like a charm! We bought 60x240cm boards, with tongue and groove edges, so laying it was basically like laying an average floor, but quicker.

I varnished the floor in two layers of whitewash (not only for a more subtle colour, but also to protect the wood), and with the basics more or less done, we were almost finished. No of course not! because why would I buy a desk and a set of drawers if I could make them myself? I just love making things complicated like that ;)

So I began...
I wanted a floating wall-to-wall desk, so I we(okay Joost helped, he's a good guy) basically mounted two beams: one to the wall, and one resting on two cupboards, supported by two support-thingies in the middle. You might think that that's quite a bit of trouble to go through for a desk, but since the room is fairly small, I think that the lack of legs is a wise choice, as it creates loads of floor-space. And the wall-to-wall desk creates both enormous amount of desk space, and makes the room look much bigger than it is. win-win!

bit of screwing and that's that!

I build a cupboard next to it, assembled from many salvaged parts, which I will write about in the next post.


And then the last thing to do was applying loads and loads (and loads and loads and "why are you still painting, please come to bed, it's 1 am" loads) of paint. I actually mixed the colour for walls and cupboards myself by adding drops of acrylic paint (brown, green and black) to white wall paint, for a powdery green/greyish hue.

the pouffe in that picture was from my last post,

the chair is a thrifted 30 euro chair from Jan des Bouvrie, that I really need to upholster (but who's got time for upholstering chairs when you can smash down ceilings instead? indeed: nobody)
The sheepskin (nicknamed Vladimir) was bought on a holiday with my parents in Budapest.

Behind my is a storage space with sliding doors, that was luckily already there.


From a dark and scary room that made my niece sob, to a light space suited for working and diy'ing, and to fill with the things I love.

Posted by adventures of making at 12:00 AM