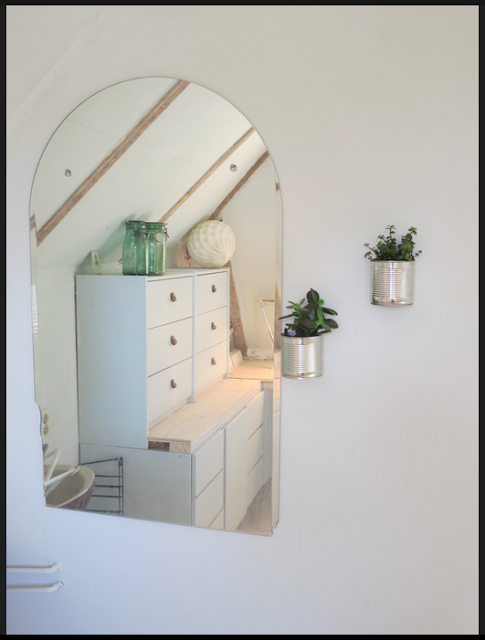 -slightly rebellious language ahead-
Every niche has its own holy grail: for mountaineers, it's the Everest, for bikers the tour de France, for bird-watchers it's the ivory-billed wood pecker (or so Google tells me).

And for a reason that is completely beyond me, the holy grail of second-hand-hunters is Pyrex bakeware (why???) and... Lundia shelving (and unclaimed van Gogh's of course, but let's not get too excited here).

'Luckily', when I met Joost, he already was the proud owner of a Lundia shelf-set that he (and by 'he' I mean: probably his ex-girlfriend) bought online for next to nothing, which is quite an achievement in itself, because those things are really expensive over here.

Which made me ab-so-lu-te-ly ecstatic.

Yep.. I hated it. I know I should have loved it: it's real wood, it's practical, it's a thrifted thing that he (okay.. she) had bought for much less than it was worth..  But I am a mean, jealous bitch, and assembling and whitewashing a great thrifted find with someone else, is in my dictionary about as romantic as having hot, steamy sex in a bubblebath (there, I said it).
And-I-bloody-didn't-want-to-be-reminded-of-that-everytime-I-saw-the-bloody-thing (hurrrrrr....)

"It's quite big, we could... sell it....." I tried before I even had moved in with Joost. But of course, Joost didn't want to get rid of it.
I tried to live with it, as I tried to tried to live with the entire fact that I had given up my lovely apartment to live in a house which I saw as 'theirs', not 'ours'. I tried filling it with my books, like a dog marks a tree. But it didn't make me stop hating it, just like I couldn't stop hating the -quite lovely-house I lived in, no matter how much I tried to rationalize that feeling away.

Luckily, all that came to an end when last year Joost and I got the key to a house that was truly and entirely ours (happy ending!!) as you probably know by now, as I can't stop talking about it. And will-you-have it: the new house didn't have the wall space for the enormous Lundia, huzzaa!

But now it's time to make peace with the damn thing. I've given a few of the big compartments with the carrier-thingies away to a good friend who was in need of storage space. That left me with a final two sets of drawers, and two cupboard-pieces. So, instead of leaving them in the garage where I can glare angrily at them, I decided to transform them into something that I would like: a customized sideboard!


The first step was mounting one cupboard to the wall to support my desk, as I showed last post.

When all three parts were assembled together, I turned the whole thing upside down...

But those stains don't matter to mama, 'cuz it's going to be the bottom of the sideboard! I didn't attach it yet, because I forst needed to screw some legs in place.

I measured the height of the already-mounted cupboard, and calculated the needed hight of the legs, and simply sawed them from a bit of left-over beam.

then I simply screwed large screws through the bottom plate into the legs.
I placed the front ones a bit to the middle, hoping to hide them a bit from sight, and create the effect of a floating sideboard.

Then I simply attached the bottom plate to the cupboards ( Hi there, screws and wood glue!) And turned everything the right side up again.

For extra strength and stability, I also screwed the three cupboards to wall, and to the hanging cupboard next to it.
BewarenBewaren

Okay, it doesn't look like a complete disaster anymore, but there's a lot to be done yet...
Before starting, I had bought a couple of cheap Ikea drawers:

I assembled them, and placed them on top of my sideboard, With the little bit op spacing I did to the bottom cupboards, the width was an exact match, which made me feel like a tetris-master, fitting all those bits and pieces into place.
I screwed them to the bottom half, and to the wall for stability ( you don't want the whole thing tumbling down when opening a drawer) And was almost done!

To create unity, I painted everything in a light blue/green/grey colour that I mixed myself.

Since I didn't really like the knobs that came with the drawers, I replaced them with pull handles, made from pieces of an old leather belt, folded and screwed to the drawers.

And that was basically it! 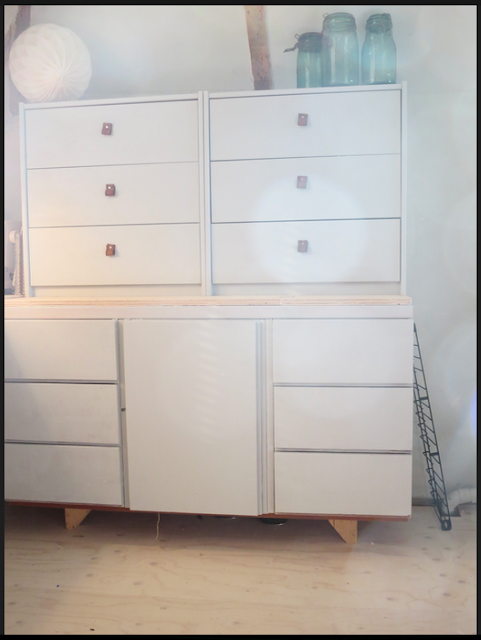 Okay, I did one last thing: as you can see in the picture, I also cut an extra piece of underlayment, to extend the desk onto the sideboard.

I really like it! The shape is quite nifty in my small room, and all the drawers  create loads of storage space, without feeling bulky.

This idea opens up a whole new world of lazy-ass furniture making for me!
By just screwing existing pieces together, you don't need to bother with making drawers and things like that yourself!
And while some of you think it really does look like a furniture version of Tetris, I do think it looks like a unity.

Posted by adventures of making at 7:01 PM