the maxi-dress that wasn't maxi enough

I can't really remember what I was thinking that day, but on hindsight it must have been something along those lines: "Ah! a big, ill-fitting stripy tent! Just what I need!" 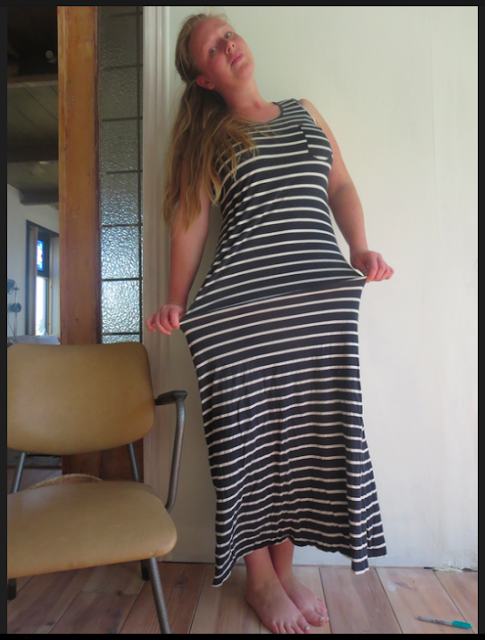 It came from one of those shops that only sells disposable fashion: you know the kind: stores that think they do you a big favor by selling you clothes for a buck or so, that will only last a season or two before disintegrating in a heap of misery.

Disposable fashion.. I don't know who came up with it, but I can only hope he/she is eternally hunted by a herd of angry hippo's in ill-fitting garments, in whatever kind of afterlife there is.

I don't think I need to tell you why disposable fashion is ruining the earth and its in habitants - you already know that- but what I can tell you is that that while I gave up buying disposable fashion quite a while a go ( go thriftshops!!), I do have an occasional relapse, where I -in a moment of temporary insanity- buy cheaply made fashion that I don't really need, or even like. Hence the acquisition of aforementioned maxi-dress... hmpf!

But well, the circus tent maxi-dress was already in my closet, so the damage is done... Let's see what we're dealing with, okay?

First of all, it was too wide, and with a shape that can only be described as "sack-like".
Second, it was way too short. With my 180 cm, shopping maxi dresses that are long enough is actually quite a struggle, though most of my short friends usually tell me to shut up about that, as they face the opposite problem ;)
And finally, the high neckline and awkward boob-pocket delivered a final killing blow to whatever was left of my shape after the visual attack of this horizontally striped mess.

Thus: time to stop whining, and do something about it!
I  quickly came up with the idea to replace the top part, to attack the length, give it a bit of shape and  get rid of the stripe overload at the same time.

So I grabbed a bunch of my old tops and started to try out some combinations.

I really liked to combination of the navy and white with dark red, and a bonus was that this particular top had shrunk in the wash, so it was too short anyway. Thus a two-in-one save!

So, I grabbed my scissors and boldly made a first cut

And a second one..

Now, the top was quite fitted and the skirt was pretty wide, so simply sewing them together would probably end up in ugly, bulging seams (trust me, I'm an expert by failure)

I made sure my elastic was the right size, and pinned it evenly to my skirt by doing the following:

It's not very spectacular, but distributing the stretch of the elastic evenly over the fabric really improves the end result, and this way you don't have to bother with measuring everything ;)

I used a broad zigzag to stitch the elastic to the skirt.

Then I pinned  the top in place, which was much easier now the skirt had more or less the same size due to the added elastic.

A final bit of stitching...

And done! I added a vintage elastic belt to complete the look, and was ready for a day of running errands!

Finally I have a maxi-dress that actually fits me! That is honestly a first for me. And I really like it! I think it quite hits the mark between casual and fashionable, and it's fitted enough to give me a bit of shape, while being loose enough at the bottom to feel comfortable in.

I know, the quality of the photo isn't exactly top-notch, and to top it, it is the only photo I managed to take.. Sorry! My excuse is that I've been otherwise engaged, since our family is recently expanded with the addition of..

Welcome to the family, Omelette, Lorraine and Coq-au-Vin! They are definitely the tiniest, cutest and fluffiest chickens around, aren't they?

Unfortunately they are also the most dim-witted ones, and for the last three days I have been carrying them in and out their night coop, since the concepts of "door" or "ramp" seem to elude them, and for two nights in a row, I found them in the morning standing in their night coop, cooouing soulfully, whilst staring uncomprehing towards the open door and the ramp that would lead them to food and -relative- freedom.

I say 'ramp' because Omelette, Lorraine and Coq-au-Vin do not only lack some rational capabilities, but also seem to lack the athelitic disposition that our neighbour's chickens have, so we skipped the idea of a chicken ladder all together -way too difficult for them-, and went for a easy sloping ramp, but so far our chickens haven't even managed to overcome that obstacle. But oh well, I love them all the same... Especially since Omelette and Lorraine treated us this morning with two perfect, tiny eggs ;)

So with all that caring going on, I've simply been too busy to photograph my new garment, but I will add a few more photo's as soon as I've got them, promise!

Hope you liked my quick refashion! ( and do not worry yet about the scraps, I've also got some plans for them!)

Posted by adventures of making at 12:28 AM