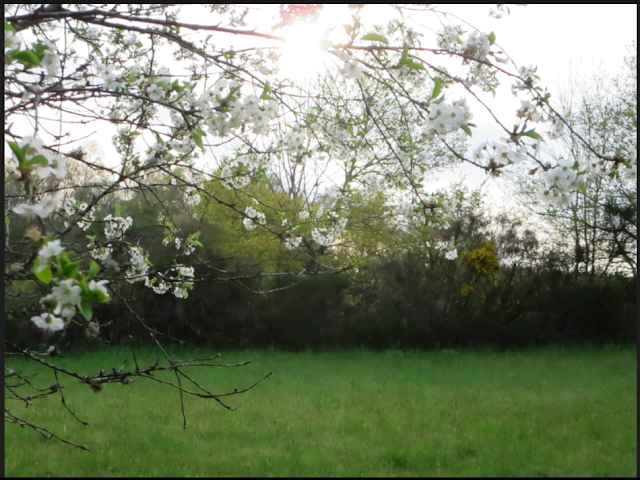 Lately the weather has been so beautiful, that even the biggest sceptic (and for Dutch people, blaming the weather for being bad comes as natural as breathing) can’t deny that spring is operating in all earnestness, and everything is teeming with life.
The branches of our various fruit trees are heavy with blossoms, and the air itself is positively buzzing.

Our cats, Inky and Lieve, have gotten so fat that every time they squeeze themselves through the cat flap to go outside, it looks as if our backdoor is giving birth.

Though, as our neighbour confided, in Inky’s case a major part of her weight gain seems to be due to the facts that over the last weeks she has been raiding the food bowl of our shy and defenceless neighbour-cat. “But Inky is so funny and fluffy that I just can’t reprimand her”, the neighbour sighed, whilst their own cat –indeed pretty scrawny- glared at us grumpily from the sofa.

But its not merely Inky and Lieve that are thriving. A finch (or a tit? Ah well, no ornithologists around here, I hope!) has made her nest in one of our shoddy bird houses, and the neighbour chickens crawl every afternoon through the fence to visit us, pleading with it soft ‘Cuuooooooooooo..’ for leftovers. And to top it all a few nights ago, while I was brushing my teeth and ended up in the garden, I encountered a happily humming hedgehog, very unbothered by my presence, and roaming through the grass like a very determined lawnmower.

For me spring basically means living outside. Every step I take – whether it is to brush my teeth or to fetch something from the fridge- seems to take to me outside. To look at the progress of our tomato-plants (tiny, as I accidently murdered the previous batch), to inspect the hedge for new leaves, to surgically remove some snails from the spinach, or just to look at all the life around me, and in the process completely forgetting what I actually intended to do in the first place.

So, as you can imagine, it was time to abandon the inside renovations, and start a few garden projects!

My project started –somewhat to my dismay- on Pinterest. I’ve said it before: while I love being inspired by others, I’m not very fond of copying their ideas. Making something invented by someone else just gives me much less satisfaction (and, well, sometimes even ends in disaster). But then I saw this..

This idea was simply to good to give up.  So I went thrifting until I found these:

The project was in obvious need of something: a good amount of wood. But where to find it? While I pondered on buying new wood, I suddenly thought of slatted bed frames: they’re cheap, they’re thrifted and they’re wood, so in my dictionary: all good! So Joost and I went out and bought a good bunch of slatted frames for this and some upcoming projects (unfortunately, I had to go back and buy an extra one, as Joost had used one to finish the firewood storage. Bastard.)

First, I removed the original reed seating, by simply attacking it with a jigsaw. ( the material makes an excellent firestarter!)
I was feeling a tad Scandinavian that day -happens to the best of people- so I painted the chairs in an oxblood-red colour in  advance.

As soon as all the chairs were in place, I took some slats from the bedframe, placed them on the chair, and marked where I needed to saw.

The conjunction was a bit of measuring and a huge amount of eyeballing, but it turned out quite all right!

As you can see, the slats for the seat-parts were a bit broader. I would love to tell you that that nifty design aspect was intentional, but in fact, it was sheer luck: I accidently had bought two different types of slatted frames, and good thing I did..
A diagonal saw line if of course longer than a straight one (hey, Pythagoras, hey!) and well, had I used the same size of wood, it would have looked very crooked ( not to mention that the gaps between the slats in the chair part would for the same reason have been very wide) So, phew: lucky save!

If you paid attention my inspiration bench, you might remember that their construction was a bit different, with the corners in the middle between the chairs.  I think their option is easier to make, but you need to have at least 5 chairs, and well, I only had four.

After all the pieces were measured and cut, it was time for some assembling (don’t assemble the entire thing before placing it around the tree, just don’t ;) )

I moved to bench-to-be to its desired destination: a tree near our small veggie-garden. I imagine sitting there with a book, watching my beans and potatoes grow, whilst scolding Lieve for napping in the spinach. 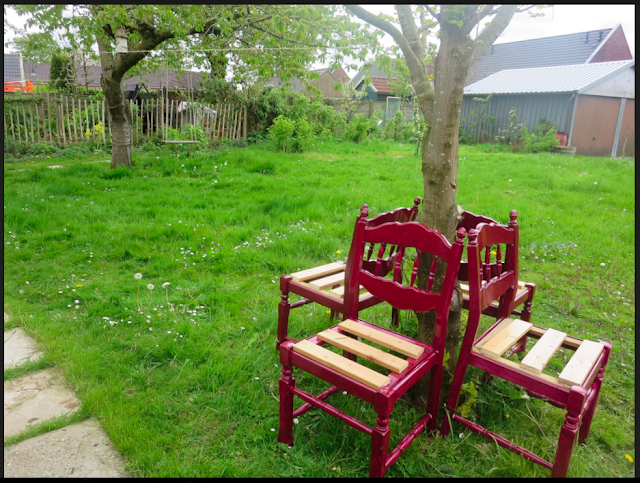 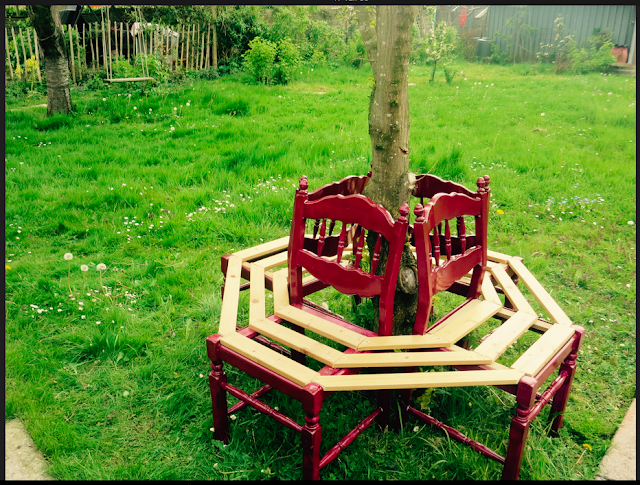 The last step was covering everything with a good layer of paint..

On the pictures, the weather may not seem like much to you, but I promise that it has been lovely over here.

And of course; the costs of all of this:

Not a bad price, I think!

How do you like it? And was the red a good idea, or a bit much?


BewarenBewaren
Posted by adventures of making at 4:13 PM