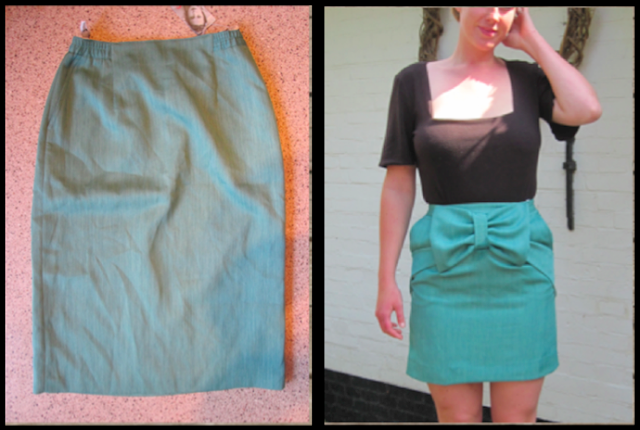 As I am writing this, I'm wiggling my toes towards a lovely French sun, overlooking one of the most beautiful sceneries of in the Morvan. Yes, I'm spending my weekend abroad! (magnifique etc etc)

Well.... after I had written that sentence - indeed underneath a lovely French sun- I spend my weekend with other French activities, such as drinking wine, shouting at French drivers (but not at the same time) and eating cheese. So, woefully, I have to inform you that the rest of this blogpost is written in plain old Netherlands. But to make you slightly jealous, this was my view of the weekend:


As you can imagine, between drinking le vin, and overlooking le vue, little time was left for crafting things. But then I remembered something: I should show you some pieces from the time my mom and I had our own refashioned clothing line!

yep, somewhere in 2012 we got a phone call from a lady from the 5050-store in Groningen, a store that was linked to the salvation army, and they were trying to launch a clothing line with clothes made from second hand clothes. We would get second hand clothes from them, and transform then into something new.
Even though we had no idea that there was an international community busy with refashioning, let alone that there was a word for it like refashioning, we dived onto it, and made a line that we called 'recyckleding'. Although the store quit two years ago, some of the things that we made can be found here! ( in Dutch, sorry!)

Here is one of my refashions:

One of the first things we tackled was this green, secretary-ish skirt. it still had the price tags attached! 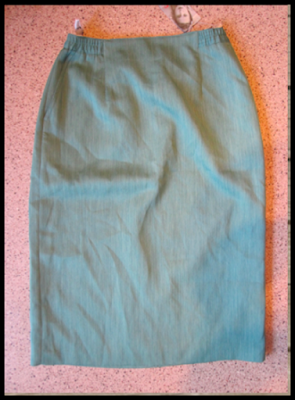 Even though I love a good pencil skirt, this skirt was plainly outdated. But something about that dowdiness intrigued me. It gave me a parisian feel, that made me want to wear girlyish skirts with black tights and black high heeld with bows on them. So, instead of reducing it, I decided to punch the dowdiness further, to a point where the it would be hip again. 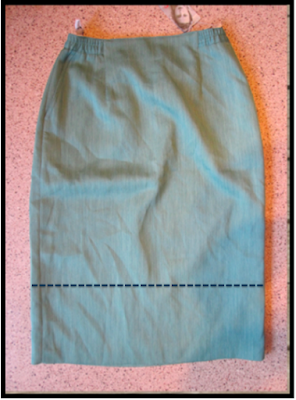 I began by tackling some of that length. I made a cut, and hemmed both the skirt and the underskirt.

This left me with a good bit of fabric. From this, I cut figures to make a big bow. ( cut from the front and the back) 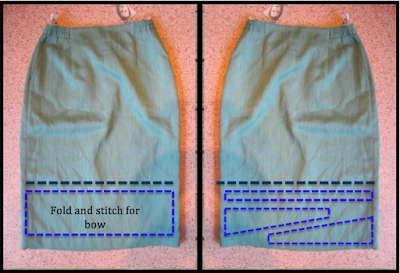 I folded the big rectangle over, and sewed it into a slightly smaller rectangle; the base of the bow.
The long and narrow piece was sewn into a tube and used to gather the bow in the middle.

Because I didn't really like merely putting a big bow on a skirt, I added two pieces to the sides, as if these were the straps that were gathered in the bow. To do this, I backed the triangle-ish pieces  with some fabric of the underskirt, and sewed the ends in the side seams of the skirt.

And this is the result! 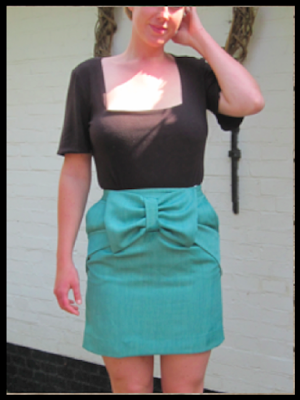 It's a little weird, it's a little quirky, but it is the kind of quirky that I sometimes really like. I'm not a very girlish girl, but when I want girlish, I like to make a statement with it :)
With a crisp, white shirt, some tights and a good pair of heels, it makes you feel like wandering through Paris, or sipping a tea in a cosy little tea-room in London. And luckily, it sold quite quickly! As it was one of our first sales in our small collection, I was so proud of it!

So, what do you think? Fun or too much?

Posted by adventures of making at 11:25 PM