Yesterday, as Joost and I were hurrying through the house and packing things, one member of our household that did not feel the stress at all: 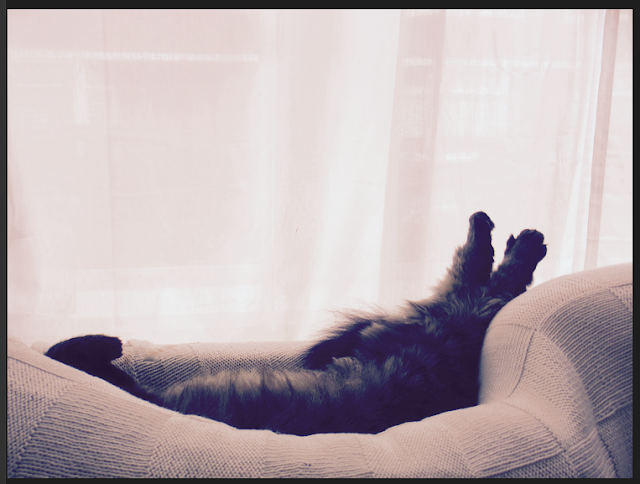 Purrr....
Oh, sometimes I really wish I was like Broen... I'd even accept such hairy legs if that would be what it takes ;)

In the middle of our choas, he had created himself a little nest in the cushions and blankets of our couch.


So, I smiled and continued with what I was doing, which was sorting out a box with lights, which had been standing in our shed for at least 3 years. On the bottom of the box I found this "slightly" outdated glass ceiling lamp.

Has a bit of a dynasty-feel to it, hasn't it?

Although I thought the shape was very cute, I decided I really didn't want a lamp like this, so I was on the verge of placing it in our thrift shop box.

But then I thought of something: moving houses was stressing me our more than it should be. And the reason for it -I figured- was because every place in the house was filled with things that needed to be sorted out, and therefore, the whole house was reminding me how much still needed to be done. So, whatever I was doing, I was constantly seeing that chaos, and it sucked all energy out of me.

That gave me an idea: just like Broen was trying to find some peace and quiet in the middle of the chaos, I should keep at least a few places that didn't remind me of the fact that our life is (quite literally) upside down.

Therefore, instead of tossing the lamp out, I decided to do something fun with it! something like... a vase?
Being the world's worst florist, using tape to divide your big vases, has proved to be very useful for me. It keeps the flowers into place without sliding to the sides all the time, and it allows you to make bouquets in vases with a very broad opening like this lampshade.

I filled  my new vase with some water, and ran into the garden to pick some flowers. Luckily, there were a lot of them!

See how nicely the tape keeps the flowers in place?
Of course, since I still am the world's worst florist, I first needed to make an entire bouquet before I realized I don't really like hot-pink flowers in a vase.... but eventually I ended up with something I quite liked :)

Later that evening we sat down and watched the Eurovision song contest, which is a contest that even Europeans themselves don't really understand.. (I mean, most of them can't even sing, and where does all that glitter come from?...) But we found a way to keep the fun going:

I was team 'hat' and Joost was team 'bikini'. Many hilarious moments ensued.

So, back to the lamp/vase: good save or not? And what are you up to this weekend?
hugs!
Posted by adventures of making at 11:21 AM