We all have those items in our home that are useful, but not specifically pretty. In my case a hot-pink plastic brush. It originates from my days as a student, and I think my mum bought it for me, since I can't imagine having bought something this pink for myself (sorry mum!) It once matched an equally hot-pink plastic dustpan, which has now magically disappeared. I still use it quite a lot. Unfortunately, I really have outgrown hot pink, but since I hate throwing away something that still works perfectly fine, I figured: Why not paint it? 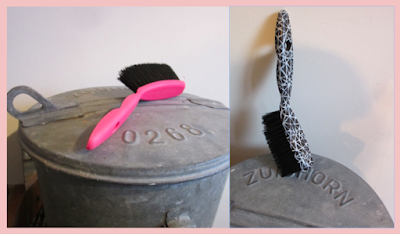 In general plastic is not a material that easily allows you to paint it. The surface doesn't absorb the paint, thus the paint stays as a layer on top of it, which usually ends in a misery of scratching, flaking and horrors alike. But with some experimenting I've done over the past years (read: failing a lot of times), I learned that it can be done if you consider several guidelines.

For those of you who are now wondering: why spend so much energy a brush that costs only €1? You are right. But it was an experiment to see how easily you can paint on plastic items. And since I only used materials that I had leftover from painting the house, so it didn't cost me a thing. If you do buy a whole can of paint for a brush, I suggest you paint a frickin' masterpiece on it to make it worthwhile. Got something ugly that you want to paint? Here we go!

1- don't paint plastic things that are made to be heavily used. read: laminate flooring, heavily used laminated furniture, things you'd often put in the dishwasher, things that often bend, things that you, your dog or kid would chew on, etc. I once tried to paint my laminated floor. The result still haunts me in my nightmares.

2- sand and clean before painting. I love using st. Marc for cleaning something before painting it, but a good bit of dishwasher soap should also do the trick. Extra tip: use a new sponge, your used dishwasher sponge already contains a lot of fat from cleaning the dishes and will only make matters worse.

3- use water-based (acrylic) paint instead of alkyd-based paints. Acrylic paint attaches much better to the plastic surface than the alkyd-version. Nowadays, most paint you can at the hardware store buy is water-based, so that should be easy.

4- give it an extra layer of protection. I use a matte acrylic varnish. It acts as an extra layer of paint, thus allowing a bit of extra protection for scratching. I know that it is really meant to use on paintings. But in my experience it worked on anything that I painted with acrylic paint, so hey; why not? For fellow Dutchies: the Action' sells it for cheap.


I practically followed the rules above to paint my brush. First I sanded it and carefully cleaned it with some st. Marcs ( it's magical, it's ecological, it's everything you ever wanted...) Then I grabbed some paint that was leftover after painting the house. I chose a black and a blue-whitish paint. 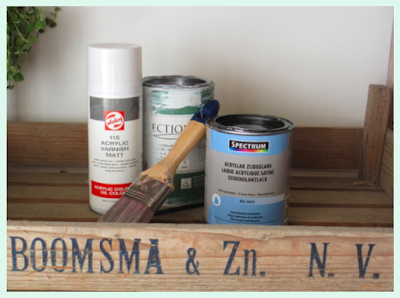 First I painted the brush in two layers of black paint... 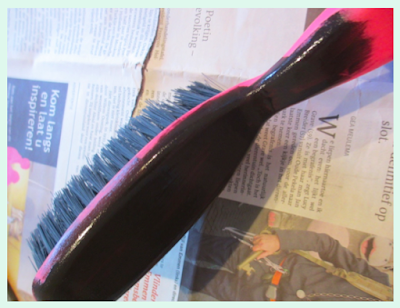 Then I opted for a geometrical pattern. This is by far the easiest geometrical that I know, since it requires no measuring at all. You just start by drawing a triangle, an start adding more triangles to the sides. By varying the form of the triangle every now and then, the following triangles will also change, creating a playful pattern.

By adding more and more triangles, I completed the pattern. 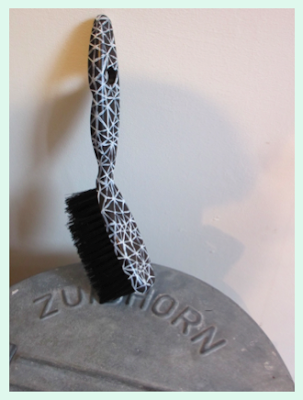 Looks quite cool, non?
I finished with a good layer of varnish. After three months of using it, the paint is still holding perfectly. I will update you in a while if there have been changes! 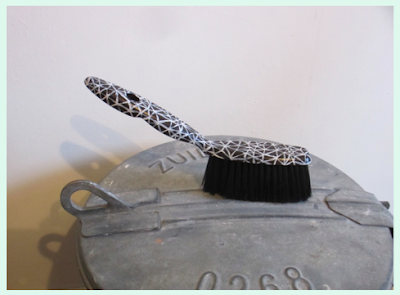 The pattern is a little loud, but since our kitchen has a natural, Scandinavian style with some industrial elements,  I think this little brush quite adds to it. And I like the combination with my old industrial bin! 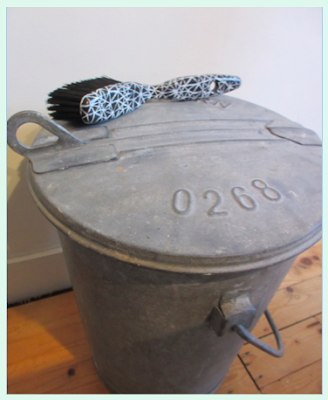 Posted by adventures of making at 2:01 PM