living rooms are for living

What is a home? A strangely relevant question in this day and age. At the age of 5, my answer was apparently as follows:


About four years ago, 'home' looked like this to me, on the day we bought our house:


That may have been our first encounter with our house, but it is much older than that. It was build in the time that our street was a merely dirt path, used by horses rather than cars.

It has survived the second world war, when during the liberation of the Netherlands in 1945, the Germans boobytrapped the bridge in our village with a heavy sea mine, which created such a massive explosion, that the debris was scattered all over the entire village, and the shockwave broke most windows in the area.

It has been used as a small farm, a house painters office, a workshop where they repaired oldtimers. It has seen births, weddings, funerals. It even survived this :) 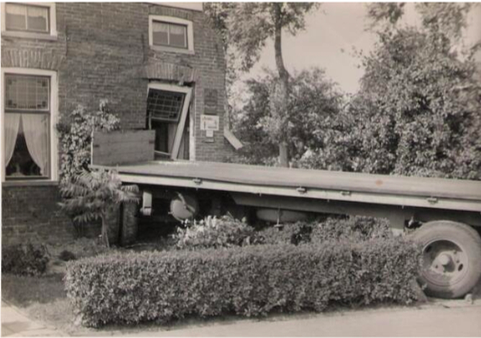 See how the entire window was knocked out, but walls look unscathed? Now's that's some sturdy building! Even the leaded windows survived!

This house is a sturdy old lady, and we hope to keep her going for many years to come.


Over the last few years, I have posted some updates on how we tackled many rooms in our house: kitchen, bathroom, bedroom, study room, garden, even hallways.. I've shared it all. One room, however, was lagging behind: the living room.

And it was a whopper. 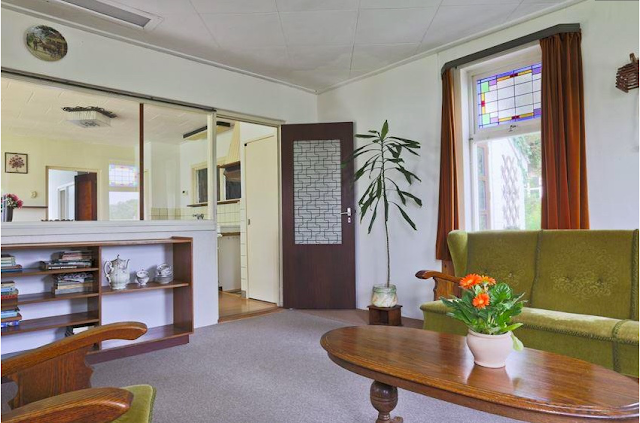 I mean, where do I start? the wooden paneling, the window that looks into the kitchen, the fringes, the orange hallway, the velvet curtains, the weird ceiling…. This room is vibing on a level that is beyond the level of human comprehesion, and as awesome as that is, I'm afraid Joost and I are not prepared for such a level of vintage.

I've guessed it: we wanted to change it. I've shared some of the first steps we took before: on our very first day, we ripped out the lowered ceiling and installed wooden floors.

A few months later, while Joost was playing football or something like that, I decided to demolish that odd wall that separated the kitchen and living room, because.. well, I felt like it. 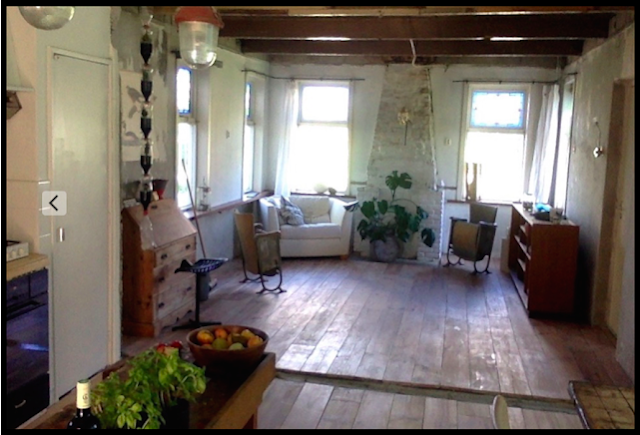 We then build in some awesome vintage sliding doors, did a half-hearted attempt to paint the walls, and were left with a living room that looked like this:


And we more or less stopped there. We hardly ever used it, because it wasn't a very nice place to be, with that unfinished ceiling, ugly chimney and rough walls.
But we couldn't do much to improve it, because we were involved in a very lengthy and tiresome procedure involving our chimney.

See, we live in an area that suffers from government-indiced earthquakes, because they drill for gas in the area. The earthquakes cause damage to the houses in the area, and as it is a governmental decision to drill for gas, they are legally required to pay for all the damage. That, however is easier said than done. Many inspectors came by, in expensive cars, demanding many pots of coffee.

That whole delightful process took three years, and probably cost the government enough money in salary for those inspectors to replace our chimney by a solid gold one.
But, this is not the place to throw mini-tantrums about damage-repairs for earthquakes; in the end we received at least a part of the money, and we are still incredibly lucky to own this weird, beautiful house.

With the government sorted, it was time to tear down that old, scary chimney! 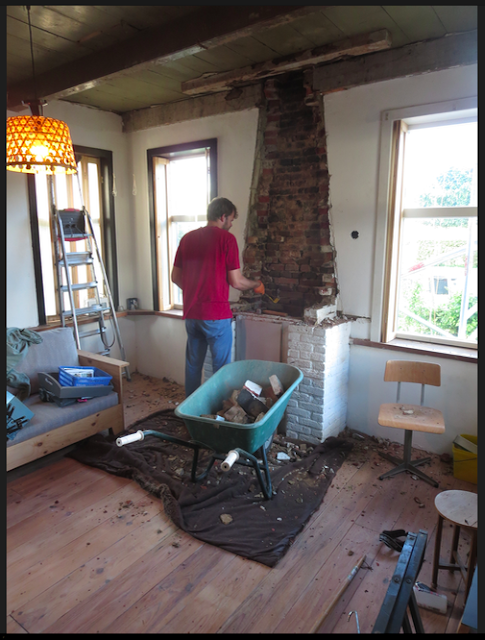 And made another bold decision: to remove the ceiling (I know, it's a theme in our house) so we could have a lovely vaulted ceiling, with the old beams exposed. That part was slightly less fun to execute, and involved several months of me on the former attic, trying to install insulation and plasterboard in the most uncomfortable positions possible. But once we removed the old ceiling, the effect was quite cool!


And after four long years of waiting, our lovely wood burning stove was ready to be installed!

With some final touches, including installing wallpaper, painting, tiling, and refurnishing, our living room is now officially livable!

As you can see, we left some of the old ceiling in to create a lovely little mezzanine/library with a sliding ladder to reach it. It still needs some final finishes, but it is a great place to sit.

So there it is, a quick tour around our renovated living room! Despite all the rubble& dust, the challenges with the government, the fact that we flooded our living room 4 (4!!) times when installing our radiotors, and the fact that something went wrong when we rewired the electrics, so everything we turned on the lights outside our front door, the lights in the living room went off,  I enjoyed this one so much.

It has turned out to be such a great room to be in. I love how I can look up at those ceiling beams, -all gnarly and crooked- and remind myself of the age of this building.

Whenever I look at our vintage pendant light I think of the hilariously vintage vibes this place had when we bought the house.

And when I look at all our thrifted treasures, I relive the memories of when we found them, often with dangerous, and sometimes illegal adventures while trying to get them home, with large items treacherously stuffed into the back of our car, trunk open, and hoping the police wouldn't stop us.

This is why I would never want an entire set of brand-spanking new set of furniture, ordered online. Where's the fun, and where are the memories in that? For me, these narratives are what 'home' means to me: an old house with a story, filled with memories.
Posted by adventures of making at 4:32 PM