mirror, mirror on the wall, who is the thriftiest of them all? 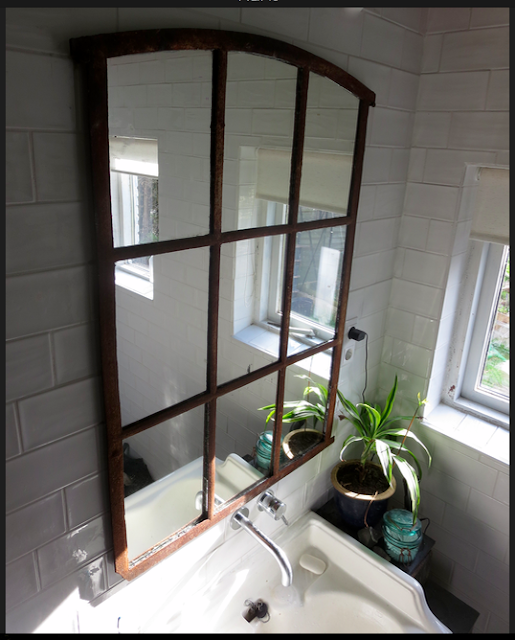 When we fell in love with our quaint little farmhouse, there was one thing we most certainly did not love...

The bathroom! Can you imagine this tiny little shower used to serve a household of 10 people?? Different times indeed, and completely unsuitable for Joost and me, who are trying our very best to re-evolve into aquatic life-forms (we take our bathing seriously, folks)

So, we decided to build a proper bathroom in our house.

A long story (that includes a hazardous ride with a trailer full of second-hand slate tiles, and a very steep learning curve on installing water lines) later, we sort of, kind of had a proper bathroom! with walk-in shower, clawfoot-bathtub, handmade vanity and everything..


A few weeks of feverishly building, installing, tiling,grouting and what-not later, we sort of had a bathroom!

One thing however, was missing.. a mirror.

We could have just bought one from the store. But by that time we had gotten so used to making stuff ourselves, that we just thought: 'how hard can it be?'

And after I found this old window-frame online, I came up with a plan!

My first plan was to spray-paint the glass so it would reflect, a trick I had seen quite often on tv-remodelling shows. "Are you sure it is gonna work?" Joost hesitated. "It will turn out fine," I said " that girl from Fixer Upper does it all the time!" Well, it did not turn out fine. One layer of spray paint later, and I was left with the saddest, droopiest pieces of glass that have ever existed, and worst of all: there was zero reflection-action going on.

Not ready to give up my cool window-frame just yet, a different strategy was needed!

So I drove to the nearest thrift-shop and stockpiled all the cheap, frameless mirrors they had. The cashier raised an eyebrow. "are you going to make one of those mirrored ceilings?", he asked.  Uhm no, because we do not live in the seventies, and my house is not a film set for adult movies..

Back to work! I grabbed by glass cutter, managed to lose it again after exactly ten seconds, and opted to use the tile cutter instead. Professional glass cutters will probably spin in their graves hearing I used a tile cutter for a mirror, but what can I say? It worked...

Then I put on safety gear, told our cats to piss off, which they didn't, so I had to temporarily ground them in the bedroom, and started cutting the glass. Once I more or less knew what I was doing, it was fairly simple..

And made the cut! Once to have scratched the glass with the cutter, a light tap on both sides of the line is enough to break the glass.

I have to admit, there were a few mirrors that didn't entirely break as I wanted to (especially thinner glass was difficult) but on the whole, it was fairly simple!

Finally, I simply glued all the different mirror pieces in the frame with silicone kit, and was done!


The mirror was very heavy, so I installed it by "simply" drilling thick iron pins into the walls to act as supports (Thankfully, our house has strong, brick walls!)


And now Joost and I can finally have a good look at ourselves, when we stumble out of bed in the morning..

The drawers of the vanity used to belong to an old work bench, that was left in our house, and although I thoroughly cleaned and sealed them, they still have all the old paint spills, and saw markings on them.

Both our vanity and our mirror as a bit rustic (or to be more specific: rusty), and that may not be everyones cup of tea in a bathroom, but I really love it! It helps that we don't have a toilet in our bathroom, which relaxes my hygiene-standards a little.  And the distortion of the different mirrors can be quite funny in the morning, when brushing your teeth :)

Just to give you some inspiration on going second-hand when remodeling a bathroom, here are some price-indications of the second-hand items we used in our bathroom:


I have absolutely no idea how much we have saved in totel, but I think it is quite a lot, and most importantly: we now have a bathroom that brings a smile to my face every time I walk into it!

And on a not entirely unrelated topic: while going through my old school work, I found this drawing that I made when I was about five years old, titled: "Marije in the bathtub". I feel ya, kiddo! 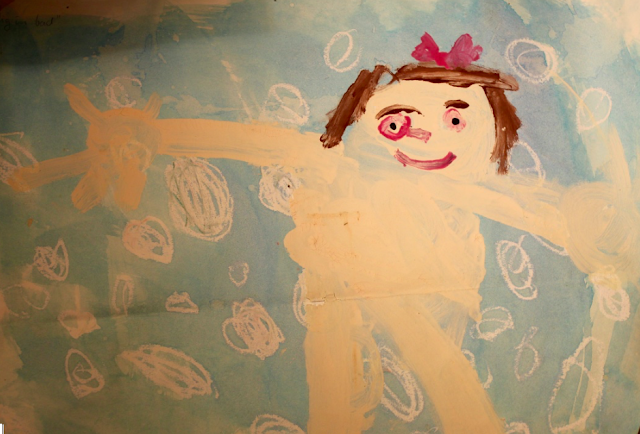 I'm looking forward to your thoughts!

Posted by adventures of making at 9:58 PM