wine-barrel planters made from buckets 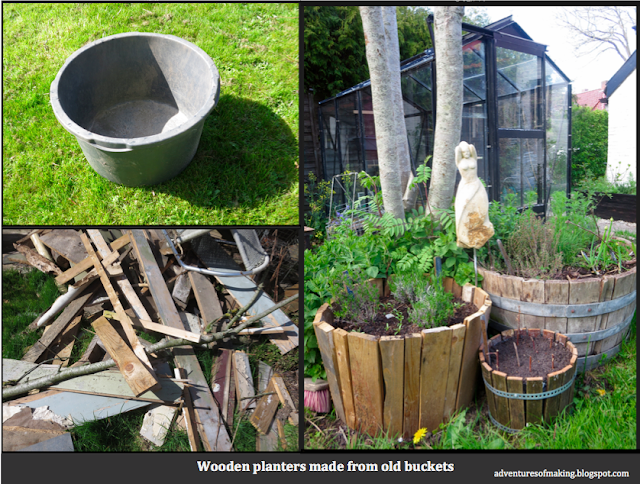 The gears of the world may be slowly grinding to a halt, but life in our little household goes on.
I'm sweating on the final straws of my PhD thesis, Joost regularly shouts at our wifi-router to improve the connection for his many video-calls, Inky works hard to keep our mouse population at bay while simultaneously keeping her belly as rotund as possible, our roosters hold daily shouting matches, and finally, Lieve's task is to watch the garden: a task she takes very, very, seriously.

Lieve is a ruthless garden-monitor. Whenever she thinks a plant underperforming, she has no qualms at all to sit on them as punishment.

However, there was something hindering her in her job….


Poor Lieve… We should have shipped this away to the skip months ago, but we hadn;t gotten around to it, and then I read that currently there are hour-long daily waiting lines at our local skip, because appearantly, the entire population of the Netherlands is simultaneously clearing out their attics.

So, as the skip was not an option, there was only one thing for it.. upcycle! Luckily there was another thing that had narrowly escaped the skip..


With Lieve's professional occupation in mind, there was only one way to go with this one: planter.

Had I been lazy, I could have just used the cement bucket as a planter as is, but I sorely needed a break from completing my thesis, so I went for something a bit fancier.

If you want to replicate this DIY -which I can most certainly recommend, because who doesn't need a nice planter in their life?- you'll need the following items.

- A plastic bucket, a cement mixing bucket works great for a bigger planter, but a standard sized one works just as well.
- wooden slats
- A saw
- An drilling machinge with a drilling bit for drilling holes, and one for screws
- Some screws ( they must not exceed the width of the bucket and slat combined) or construction kit


If you want an easier option: when I made my second planter, I discovered that construction kit works perfectly well too, and is a heck of a lot faster. Especially when combined with some band iron, it should be more than sturdy enough.


As the top of most buckets is ever so slightly wider than the bottom, I needed to space them out evenly. As I used scraps of wood, and had some tapered pieces in there, I used those every now and then to keep it looking good ( you could also cut some pieces to fills the gaps)

I thought it was quite succesfull!

Posted by adventures of making at 10:50 PM