I dig it! Garden upcycling 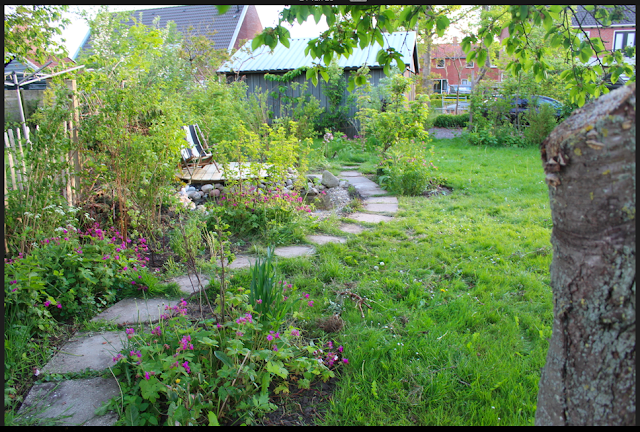 Hi friends and other creatures!
I just started to write this post, when I thought about what this project must have been like from the point of view of Joost. You probably remember him: my long-suffering boyfriend.
I'm guessing it must have been something like this..

"You know.." I looked up from my computer to see Marije looking at me. Before continuing her sentence she smiled with what she probably thought to be an innocent smile, but what actually looked like the expression of a gnome brooding on an exceptionally bad idea.

I sighed, putting my pleasant thoughts about work, sports and computer games aside, because in my three years experience of dating Marije, I know that whenever she says "you know.." in that way, my peace of mind flies straight out the window.

And there came the rest of the sentence: "I'd like to have a pond!"

Of course, I should have known better: ever since Marije developped an unhealthy addiction to a BBC tv show called 'Gardeners world', Marije had been frantically digging in our garden, moving plants and bits of grass around, and planting every thing that vaguely resembled plant-life. But a pond, really?

"You dug a pond that last year, and it was shitty" I tried.

"We have quite litterally finished an enormous renovation in the bathroom 10 minutes ago" I tried.

But Marije didn't listen, having refocussed  on what that blasted tv-show said about installing a pond in your garden, and googling every picture of ponds that the world could offer her.

"The chickens would drown in it" I tried as a very last resort ( because, in fact two of our chickens had drowned in the neighbours pond over the last months, and I knew Marije -rightly- felt quite guilty about it.)  She did indeed look a bit guilty, remembering the fate of our beloved chickens 'Omelet' and 'Nugget'. But it wasn't enough: she should absolutely, most definitely wanted to make a pond.

And so, while I reevaluted my life-choices and thought about the possible benefits of having a post-order bride instead  of strong-headed Dutch girls, it happened that Marije grabbed her spade, went into to yard, and started to dig a pond.


- post-order bride jokes aside ( is that still a thing?), I am guessing that it must have been something like that. Because even though we usually make quite an awesome team, my endless stream of good, bad and extremely bad ideas for house-improvement projects does cause Joost quite a few grey hairs.

To be fair though: he was a really good sport about it once the project was well underway, chipping in with the more strenuous tasks, such as providing the stones.

But the reason for wanting a pond were not just to turn my boyfriend's hair grey (even though he looks good with it) or to fangirl about Gardeners World (even though I do.  My reasons absolutely, entirely rational. And were as follows;

So, a pond was needed, and a pond we should have!

I picked my least favourite sport in the garden (aka cat-poop-corner), thinking that it would mean that if I choose the ugliest spot, a pond would certainly increase its value.

And... I simply started digging. I didn't really bother with taking photographs, since photo's of a plain hole in the ground are silly, but I did use the soil to make a few raised vegetable beds. (upcycling for the win #1!

The raised beds are already beginning to show their worth, because some of the veg is growing like mad, even though it has been really cold over here.

ps: do you like the plant labels? They are off-cuts from the  slate floor tiles we used in our barthroom renovation, that I painted names on (upcycling for the win #2!)

the wood chips are from an old hedge we had to take down, and the pavers are those really ugly gravel-pavers, but turned upside down, so they look quite okay now (upcycling for the win #3 and #4!)

I continued digging, making more raised beds as I went along, deliberating with Joost about the size and shape of our pond, untill we were both satisfied with the result.

garden-guru Monty suggested to line the pond with strong fabric to prevent roots piercing your plastic, so I scavenged around for some suitable materials.  Luckily, I had failed to throw away saved some Groovy curtains ( orange velvet...) that came with the house when we bought it.. Aren't they gorgeous? ;)

So I sacrificed those to line the pond (upcycling for the win #5!) and then bought some eye-wateringly expensive pond-liner, because, as Monty casually stated: "You can save on pond-liner, but then you'll probably have to do it all again next year." (That's true, Monty, but I still feel like I failed at upcycling) 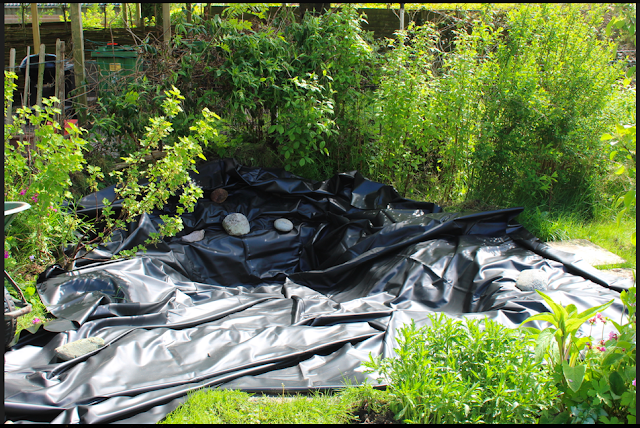 Next came the issue of stones. My thorough research into wildlife ponds had learned my that a wildlife pond needed two things: a gradually sloping beach made from pebbles or sand, so animals can drink without drowing, and and edge lined with loads of boulders and stones, so frogs and creepy crawlers have all sorts of nooks and crannies to hide in.

Pebbles were no issue at all: we had loads left over from earlier projects. And for the stones.. well I knew where they were: in our front yard...

However, they were set in cement... Luckily, at that point, Joost arrived home, who decided to get all manly and sweaty with a power tool, which meant I only had to wheelbarrow and place them.  (upcycling for the win#6!)And.. The pond was ready to be filled! 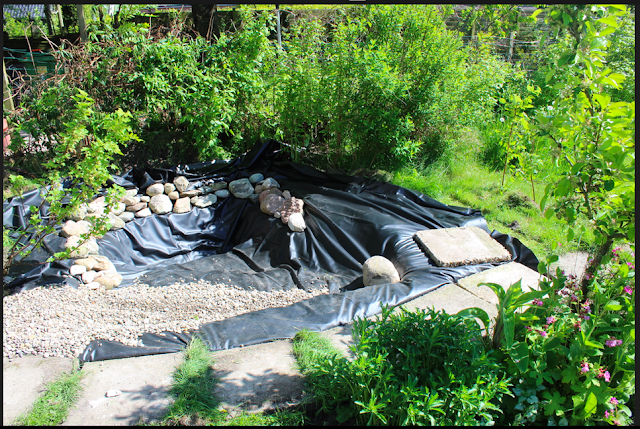 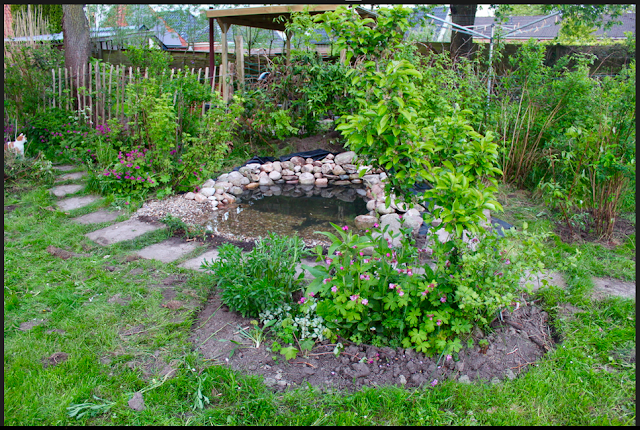 Now all that was left to do was cutting the excess liner,  and create a little sitting area near the pond.

Without going in too much detail, I did the following: 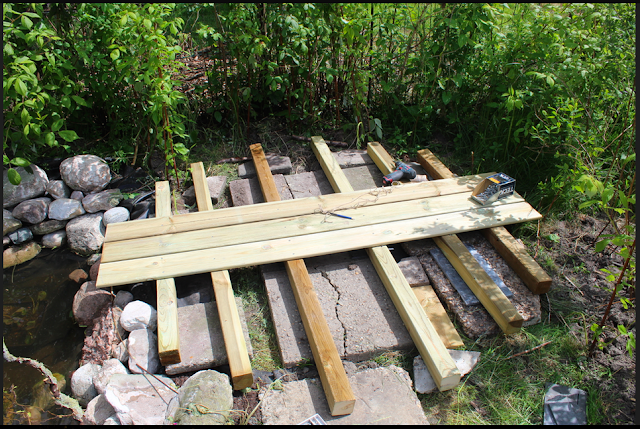 - I used some old and broken pavers to create a foundation. It wasn't perfect, but was enough to support the beams. (upcycling for the win #7!)

- Created a circle on the ground, using a string tied to a peg in the center of the circle, and marked the area ( with twigs, but chalk would probably have been better)

-  laid down some wooden beams in the circle, about 30 cm apart

- screwed down the first board in the middle, and work my way to the edges, again using a string screwed to the center of the circle and marker the measure the new boards as I went along. 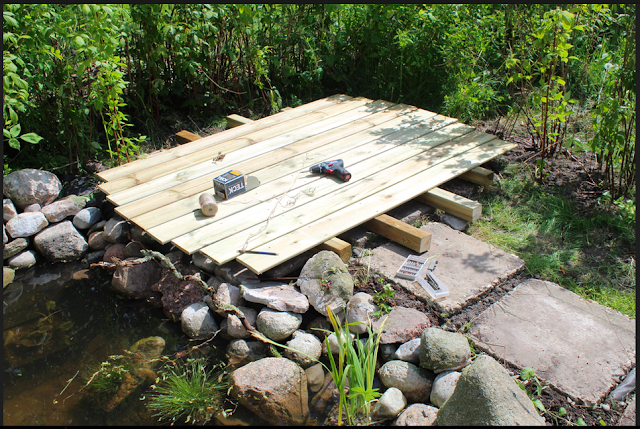 - and finally gave the whole deck a clean edge using my jigsaw as soon as all the boards were in place. 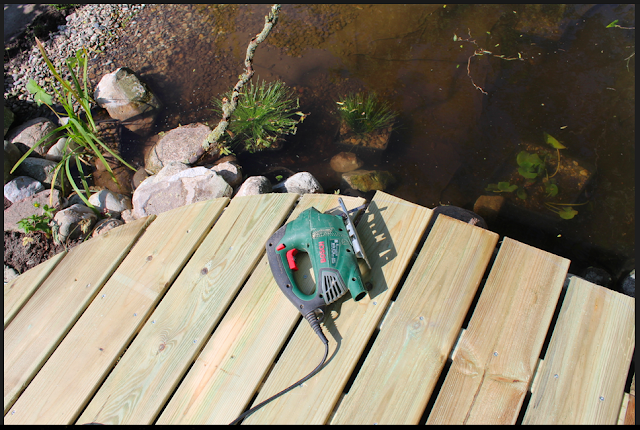 And the endless days of pond-watching have begun!

the chickens quite literally came running towards it to drink and frolick on the beach-end, and I saw loads of insects and birds drinking already!

and top top it all, my mum called me to tell me she'd bring a mass of frogspawn over from their pond this weekend, so I'm looking forward to seeing them develop!

But most importantly, I am quite amazed to see that we went from a garden looking like this 3 years ago... 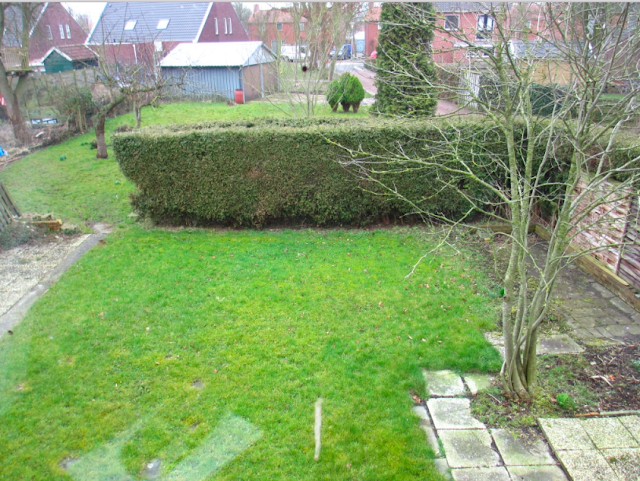 to this ( and hopefully even further!) 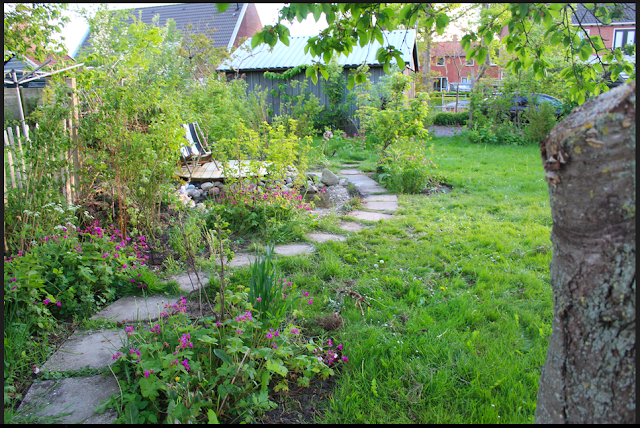 If I look at the amount of pleasure our garden has given us, the visible increase of wildlife that arrives in our garden as we continue to add flowers, the smell of flowers in spring and summer, it is more than worth the work.

If you'd like to upcycle in your garden, or just garden a bit without all the money, here's my favourite tips:

- plants are literally the best upcyclers in the world, because they grow, multiply. So collect seed, multiply your plants in spring by dividing them, . (Geraniums, the pink and white ones in the photo's, are the best upcycling plant ever: I started with about 10, and by dividing them each time, I now have hundreds in various colours.)

- Instead of buying loads of soil, think about reusing soil like I did: by creating a hole or pond in one place, you gain free top soil to be used elsewhere. Most plants thrive even in quite poor soil, so just give it a try!

-Reuse your old tiles! they are amazing: as foundation like I did, as bug hotels, as planting edges, or glued together as planters..

- Ask around for some free plants or seeds from other people: like I said, plants multiply, so people quite probably have some spare seedlings for you.

- and finally a garden is an awesome place to upcycle your waste and weeds: cuttings, kitchen scraps and cardboard make good compost, and nettles and cumfrey make an awesome fertilizer.

And just enjoy it! 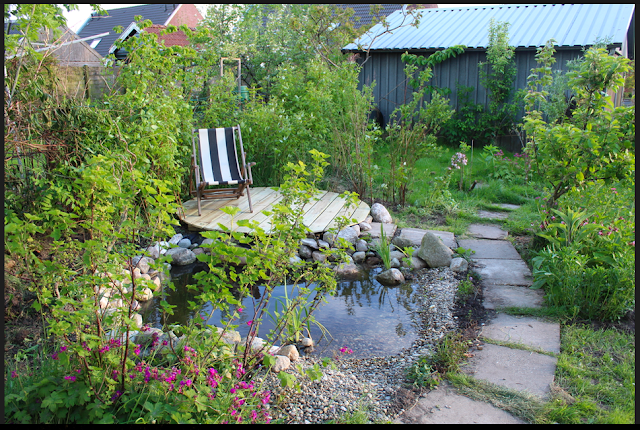 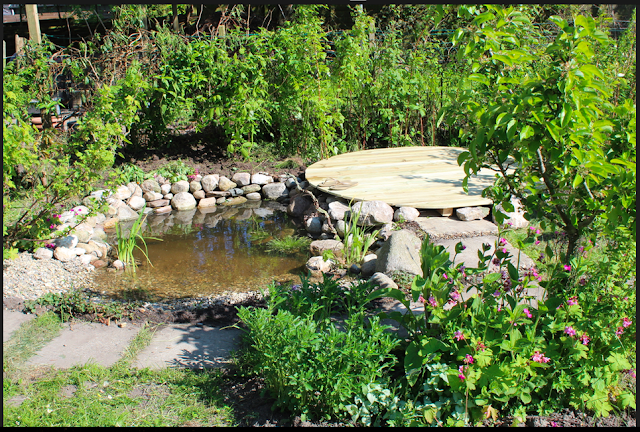 Posted by adventures of making at 10:28 PM