far away and back home again (oh, and an easy necklace!) 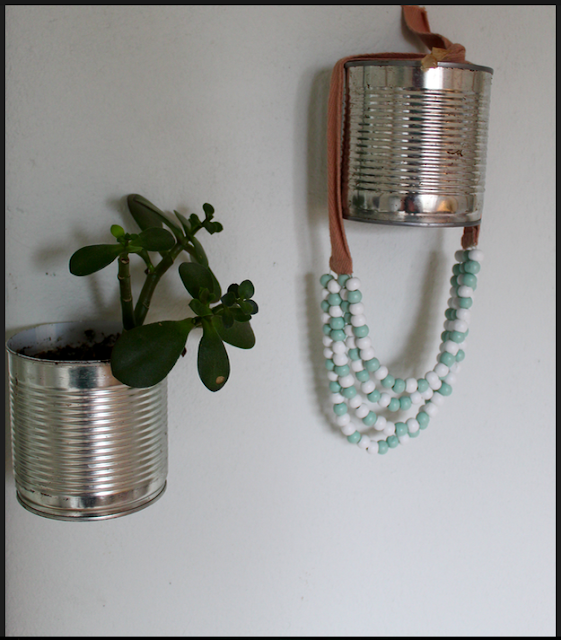 Who doesn't think of him- of herself as a traveler at heart? I most definitely do: fawning over pictures beautiful landscapes, whistfully writing "wanderlust" on he back of my notepad (you gotta give it to the germans; for a language that sounds so much like sneezing, they do come up with awesome words), secretly wishing I was the kind of person that could throw a suitcase and a tent over her shoulder, and just disappear for a year...

And every now and then actually travel! 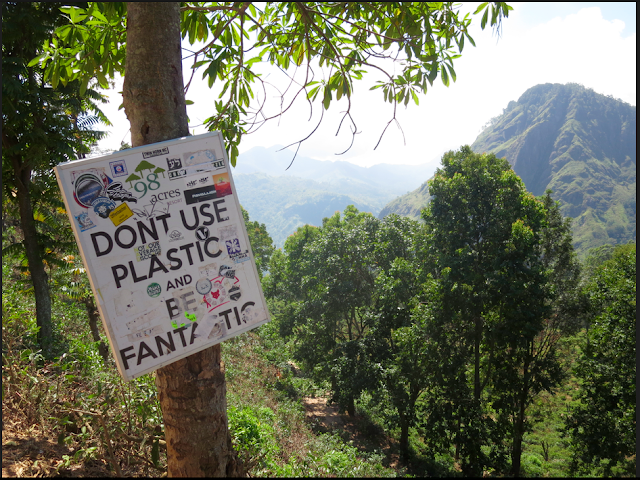 But traveling is always a bit of a difficult topic, isn't it? Because next to secretly thinking of myself as a wanderer, I also define myself as a person who cares (and worries) about sustainability. And with traveling, well.. the getting there part is.. tricky. I realize that my cycling to work, upcycling and vegetarianism is not really making sense CO2-wise, when I hop in planes all the time, but on the other hand.. the world is so, massively, amazingly beautiful! So I decided to settle on a middle, by using the less sustainable modes of transport as scarcely as possible, and when I do, to at least, really, really make it count.

It's not a perfect solution, I know, I'm probably a huge hypocrite. But I'm trying to convince Joost that our next holiday should be solely done by bike, and out of guilt I've planted a massive amount of trees in the yard, to at least sort of make up for it ;)

Oh, I'm drifting off course! I'm saying this because Joost and I went backpacking for three weeks in Sri Lanka! and it was movingly beautiful. 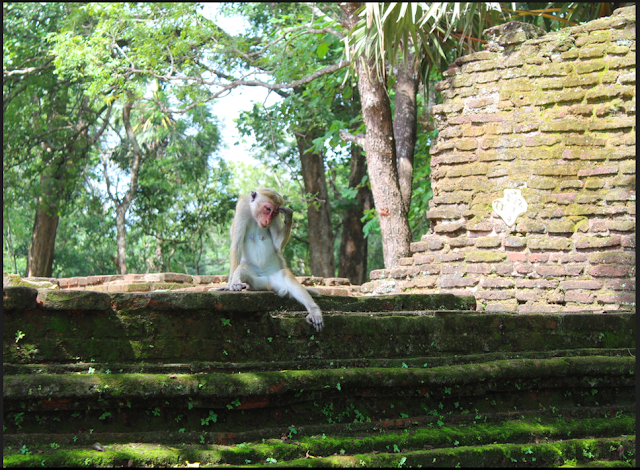 Isn't Sri Lanka beautiful? I've never felt so close to nature as I did there. Nature in the Netherlands -as in most of Europe- is cultivated, but in Sri Lanka, nature is untamable, vulnerable, wild, and everywhere. 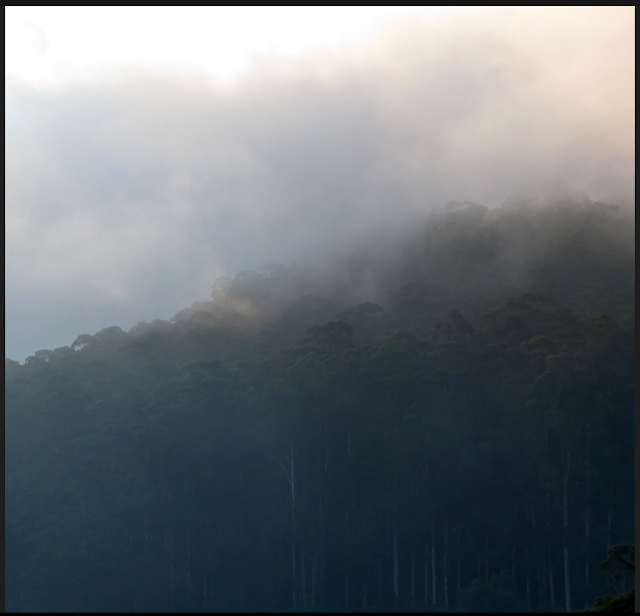 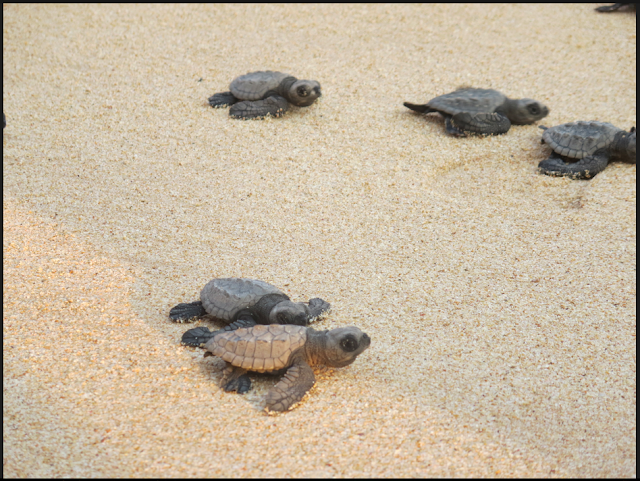 I actually cried when we stumbled upon the coast guard, releasing these beautiful baby sea turtles into the ocean. I also cried when I came across their adult versions when snorkeling, and it completely fogged up my mask, leaving me blind at sea ;) So, I just wanted to share that with you. Our world is so beautiful, let's just hug it a little every now and then!

But now we're back at Dutch soil, where nature mainly consists in the budding trees in our backyard, and our chickens, who are currently being harassed by a very chubby Inky, who has decided that she has every right to the corn I fed our chickens...

And with that, let's turn to a very down-to-earth little craft!

As you probably know by now, I have quite a bit of trouble with throwing certain things away, even when I don't really like them. In particular: anything you can DIY with, should in my opinion stay.  So, even though I'm not the biggest hoarder in this family ("I'm not a hoarder!" Joost defends from behind his pile of 15 empty plastic bottles, which he kept "because they are so convenient for drinking water"), my DIY-stash is an ever growing collection of materials with a questionable use.

And amongst them, I found some candy-coloured wooden beads. what, I thought.. should I do with those?

Wooden beads are difficult! I love beads, but these wooden ones don't typically spell fancy, or fashionable, or adult for that matter. They really are the kind of thing you give to little girls who are too young to play with the nice glass beads, because they might stick them up their nose. (it doesn't matter,  little girls can also stick wooden beads up their nose, believe me, I've been there).
A simple necklace, I figured, would just make me look like a kindergarten-teacher on steroids, and while I love kindergarten teachers, they are not typically my style icons.

I played around with the idea of sewing them to a shirt, as a sort of funny polkadot, but I realized that they might just look like really weird nipples if you'd wear a cardigan on top of it.

So then I thought: why not just go big, and rock it? Then it might because be a graphic statement, rather than a little girls necklace.

So, I found some nude-coloured ribbon ( a.k.a. the drawstrings of a pair of pyjama-bottoms) to make the necklace look less like it was made by a toddler, and sewed the ends so they wouldn't fray.
And found some strong binding yarn, once gifted to me by my grandma ( see that cute little label on top of it? My grandma is so neat! ) 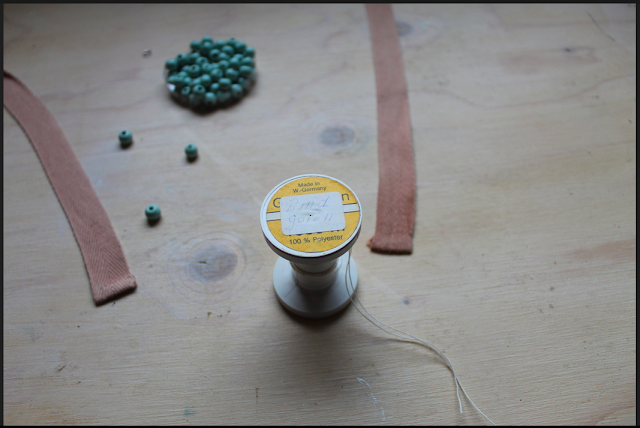 And by then it was a matter of tying the thread to the ribbon, and simply stringing the beads! I mixed the whites and teals randomly, and chucked the orange and pink ones out. I'll hand those to my nieces later on ;)

By laying the necklace in a circle, I could determine how many more beads each row needed. 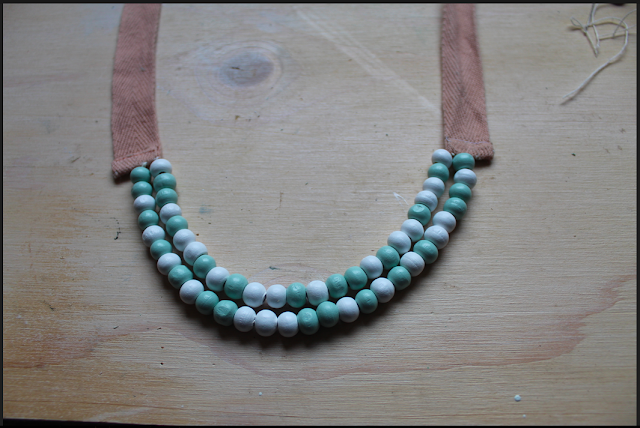 Two more rows, and then  I decided I'd had enough! I could have added a clasp in the back, but I quite like the simplicity of tying it with a bow instead.

And voila, a statement- necklace is born! 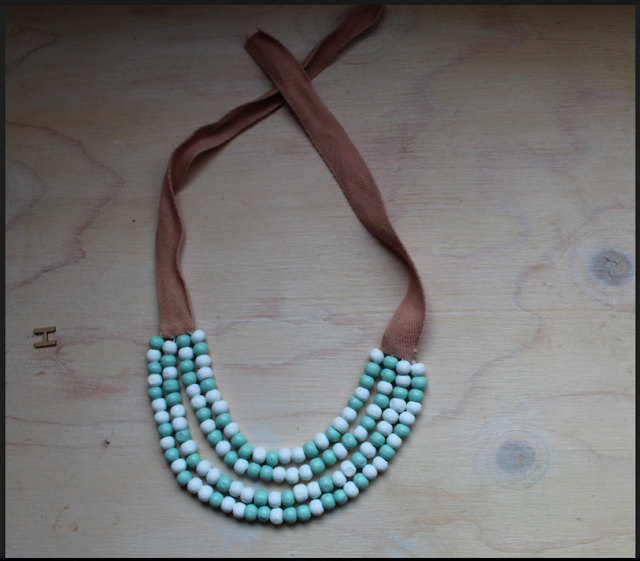 Isn't that the easiest craft in the world? It's so easy it doesn't really deserve its own blog-post, but here we are!
It's still a little happy and pastel-ish, but I think not in the way that makes you look like a child dressed you, but (I hope..?) in a slightly mature way. Which is good, because in a few weeks I'm turning thirty, so I need al the maturity I can get ;)

Doesn't matter though, I quite like aging. I like old books and furniture better then new ones as well, and I hope the same goes for human life. They are not wrinkles, they are patina!

Hope you enjoyed it! I'll be writing about some actual DIY's soon!

Posted by adventures of making at 5:02 PM