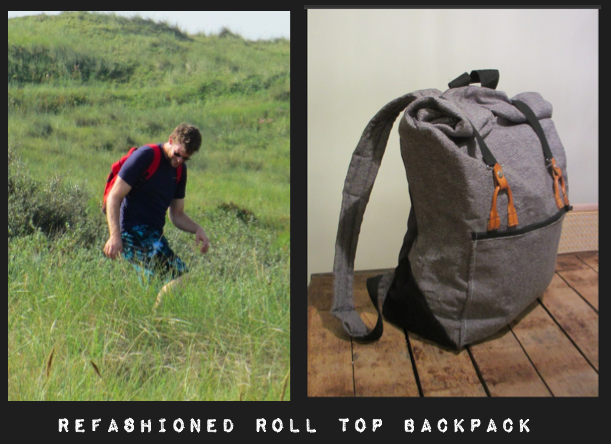 "Ugggh, I can't move..." I sighed last Monday, whilst hobbling through the house like an old lady.

Yeah.. After a couple of years being lazy in the city center of Groningen, those bicycle rides (31 km a day) are something to get used to, if not for the sore muscles, than at least for the damage that a saddle does to your butt. I'm not gonna describe the situation of my bottom in detail ( I've got boundaries, people! Not many, but still some!) but let's just say that if I had been a baboon, they surely would have thought I had my fertile period.

Luckily, the view during my cycle ride is not too bad...

As I soon discovered, not only my butt and bicycle, but also my collection of bags is not entirely adjusted to the long bike rides: I only own shoppers and hand bags, which aren't very useful on a bike. So, I decided to make myself a backpack!

luckily, I had something to start with, here gracefully modeled by Joost:
A slightly nerdish, red backpack! 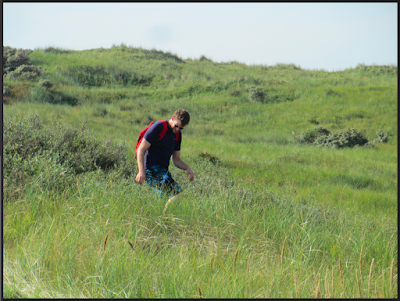 I bought it last summer because of two reasons:

For the rest, it was worn-out and ugly, and made the wearer look ever so slightly like a ladybug ( which was fine for one day, but I'm refuse to look like a ladybug-lady for the rest of my cycling life), so I decided to upcycle it.

Got an old, ugly backpack yourself? Here's what I did with it!

- I decided to make something slightly more fashionable, so I began by cutting the red front from the bag from the back part ( the back, padded back with the straps and the bottom). the red fabric was beyond saving, but I did cut out the zippers, to use later.

- I measured the bottom, and grabbed a piece of grey upholstery fabric that was leftover from the couch I once made ( might post about that some day!)

- The pattern for the backpack is actually very simple and just a long version of this shopper I made earlier;
- before sewing the pattern together, I added a zippered pocket to the front of the bag, because pockets are life. ( pro-tip: use that zipper you just rescued from the old bag!)

- After sewing the fabric into a basic bag with boxed corners, I used tape to make the inside on the sides and front waterproof. Yeah, I know, it looks tacky, but hey, it works ( and it will be covered by the lining of the bag)


- Then, I sewed my grey, new back onto the old back the bottom of the backpack, which requires a bit of fiddling here and there, but if your measurements are correct, it shouldn't be too hard.

- Since my plan it to make a roll-top backpack, the top of it doesn't require too much work, But I did need to add some straps to keep the top closed once it's rolled up. For this, I took some elastic, old-fashioned suspenders I once thrifted for 50 cents or so.

If you've never come across those kind of suspenders, and are wondering what the heck I'm doing here.. don't worry, you'll get the idea in the final pictures!!

- I needed to cover up that ugly tape, so I made some lining out of some rest fabric, attaching it by hand to the bottom corners, and sewing it close at the top of the bag.

- we're getting down to the final details!! I covered the ugly red straps with grey fabric.

- I added some final extra's, such as a small pocket on the inside, and sprayed the outside of the bag with waterproofing spray ( kind of the same stuff you use on your boots)

So, now I have a quite fashionable backpack that only cost me 1 euro, some residu fabric and a bit of tape! Quite neat, isn't it?

After more than a decade of avoiding backpacks (I still got nightmares from my horrible, big backpack I got in my first year in high school) I'm so happy to finally own a backpack that I actually like. I got a lot of compliments on it, and I love how the roll-top makes the bag adjustable to the amount of stuff you're carrying with you, and bonus: never fear a busted zipper again!

If you're planning on making one yourself, I hope my instructions are clear enough ( this kind of refashion does require a bit of macgyvering, since every bag is different)  But if you get stuck in the process, don't hesitate to ask!

-Marije
Posted by adventures of making at 12:02 AM