countryside things! On elderflowers and family. 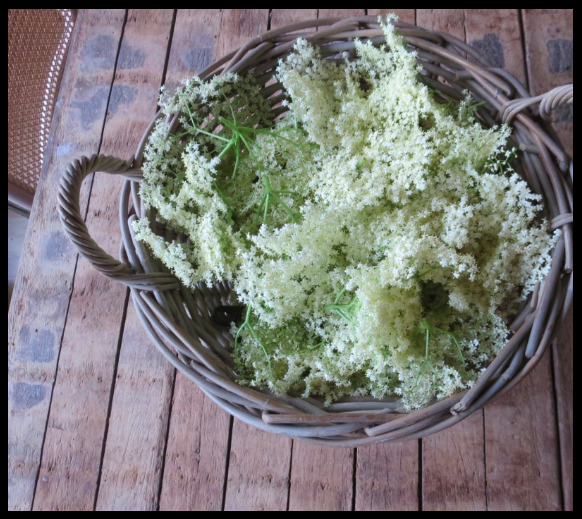 I was nine years old when my parents moved to the countryside. Moving from our modestly sized family house to a large farmhouse in the middle of nowhere was quite a big change, and from the first weeks of living there I remember most vividly the smell of grass and blossoming flowers, my fear of getting lost in that big house, running around throughs the fields, and my unshaking conviction that there was a vampire living in our chimney.

On an especially warm evening in June that year ( we had moved in a couple of weeks earlier) , my mother looked up from unpacking boxes and said: "let's go pick elderflowers, so we can make lemonade with it." I still remember her saying that because for me, it was the summum of countryside living: just picking some flowers to make lemonade! How cool was that? In my mind, lemonade came from the supermarket, and the fact that you could not only make it yourself, but make it from something that was simply growing on the side of the road amazed me.

So I threw on the most romantic, countryside dress that I could find, we picked up a basket, and went picking elderflowers, just down the road near our house. Even now, years later, the smell of elderflowers brings back those memories: picking flowers and making lemonade with it. So, when I saw that the elderberries near our new house were blossoming, I told Joost: let's go make some elderflower-lemonade!

We set off to a place with some elderberry bushes nearby ( not too close to a big road because of the dust&dirt), and started picking the blossom-screens that were completely in bloom, and high enough of the ground so that even an expert target-peeing animal could not have peed on it (I'm looking at you, damned foxes!)

When we got home ( which took a while, because here you have to wave at every singly neighbor that you see, as forgetting that will most certainly result in abandonment from the village for life) I shook some of the more stubborn bugs out of the screens (byyyeee!), cut of the bigger parts of the stems,  I placed all the screens in a pan and gently pressed them together to fit as many screens in there as possible, and then i covered them with water (about 3 liters for 30 screens) 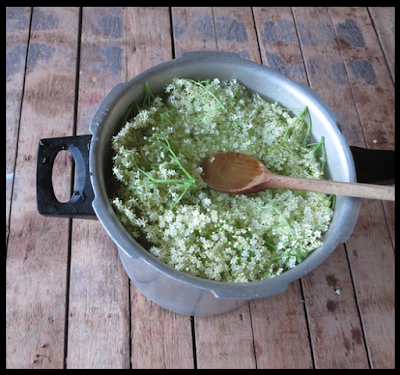 I covered the pan with a lid, let it stay overnight, and went watching this weird series with Joost where people get really ugly tattoos and whine about it a lot ( I know, we have no taste at all in choosing series!).

Then the next day, this arrived:

My mother, knowing about our plans to make elderflower-lemonade, had send me her famous family-recipe! She even added some vanilla to put in there, and a note saying that she would have loved to add the citric in the package as well, but she was afraid it might be mistaken for something else (  ;)

So, sticking to the recipe, I continued as follows:

- I sieved the elderflower/water twice, once through a sieve, and once through some cloth to filter all small pieces out.

Then I measured the water I was left with and added the other ingredients, which were:

I cooked it all together for about 15 minutes, while stirring it.

While the syrup was cooking, I sterilized some empty glass bottles, and filled them.
After filling the bottles, I placed them in the steam oven for 20 minutes to preserve them, although that isn't really necessary with this recipe: the sugar and citric alone should be enough to preserve it for at least a few months. (But I like to be on the safe side, especially since  I want to use the syrup for gifts)

Of course, I didn't have enough empty bottles at hand, so some of it I had to pour in empty coke-bottles, waiting until we've got another batch of empty glass ones.

and.. does it taste good? Let's ask a completely unbiassed person to judge that, shall we?


Of course, if you are willing to second-guess the objectivity of that judgement, I am more than happy to expand my test-panel. so if you are ever in the neighbourhood (Groningen area,Netherlands) please hop by for a glass or a bottle of it!

Posted by adventures of making at 2:39 PM