An explosive post ( Or: how to fail miserably at pinteresting)

Oh my, oh my!
I really want to write you a post, but truth is: I have nothing to post about! What has happened to me?


and well... I was almost finished, but then I realized that I don't like pink, I don't like flower prints, I don't really like bathrobes, the fit was horrible, and that the fabric was a bad choice for a bathrobe to begin with. I am failing miserably, my friends!

(I'm guessing my nieces will receive some pink, flowery tutu's in the near future though..)

So what to do? Wait with writing until I have tracked down my mother and convinced her to take some pictures of the finished bee hotel.. ("oh hey, mum! pretty pretty please??")
Or.... write about something else perhaps?

Well the former idea was my go-to plan, until I read this on bored panda (go and read it, you won't regret it )
Look. At. Those. Epic. fails!

Pinterest deceives us, my friends!
I think that I'm quite an accomplished DIY'er, but every time I try to copy one of those Pinterest-tutorials.... I fail, like the failiest of all failers. And as it seems, I'm not the only one, phew!

So, with all those other people sharing their fails, I'm confident to share one of my most disastrous fails. One that involved an actual explosion. An event that I shall call from now on..

It all began when I needed a little fun-gift for my sis-in-law for sinterklaas ( you know, that Dutch substitute for Santa Claus)
Absent-mindedly I began scrolling through Pinterest until I found this: 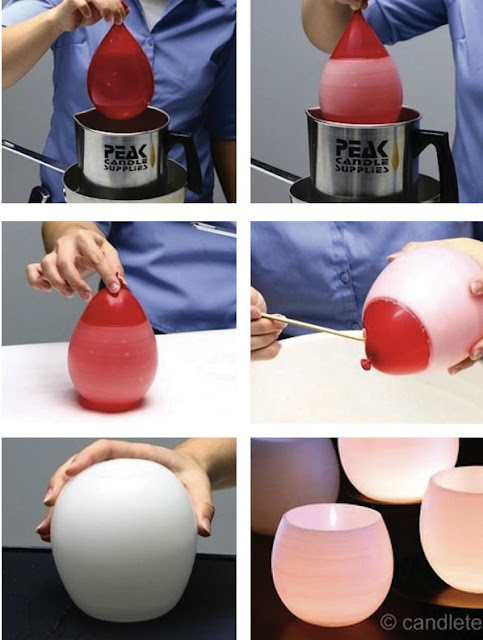 Just what I needed! And the pin had all the steps in the pictures! How convenient.

"Meh, no need to read it" I thought. "That's easy. I've got this in the pocket." No need to click on the link.

"Candles. I need Candles" I thought. So I went scavenging through all the cabinets until I had collected a bunch of old candles (our former house always seemed to grow that kind of materials in old cabinets and corners)

"Heat! I need heat!" I thought, and went to the kitchen, fired up the stove, and began to melt the old candles ( Au bain Marie, I'm not a complete idiot... or am I...?)
I even found an actual balloon, I was right on track!

Now all I had to do - or so I thought- was blow up the balloon, and dip it into the wax. And that was exactly what I did. Unfortunately.

I blew up the balloon to a good size.

Took the melted wax from the stove.

Dipped the balloon in the wax and...

there was a deafening sound. a shocked Joost came running towards the kitchen, and found an even more shocked Marije, covered in hot wax (I paid the price for my stupidity), holding up an exploded balloon.
It wasn't just me who got covered in wax: the kitchen counter was completely covered, the backsplash, the floor, our kitchen utensils.
"What on earth are you doing?" Joost asked, after he had made sure I wasn't too hurt.
" I'm trying to make this really nice bowl..." I muttered. "The balloon must have touched the hot side of the pan.."

It was quite dramatic. But it gets even worse. Because what does a smart, educated girl do when she makes a stupid mistake? Of course: she makes the same mistake again.

I thought it would be better If I made sure not to touch the side of the pan. But that wasn't the problem. There was another explosion. More wax everywhere.

Had I taken the time to read the tutorial ( or you know, to use my common sense) I would have known that the balloon had to be filled with water, not air. It makes quite a difference, air has the tendency to expand quite quickly when heated, which isn't really a good idea when the air is trapped inside a balloon ;)

It took several days to get all the wax from my hair, and several weeks to clean the kitchen, and it will probably take several years before my family forgets the whole episode and stops mocking me for it!

But it does make a good story, and the morale of the story? Never trust pinterest-pins, and if you do:
at least read the instructions carefully ;)

Hugs!
BewarenBewaren
Posted by adventures of making at 11:43 PM