on Dust and Demolition 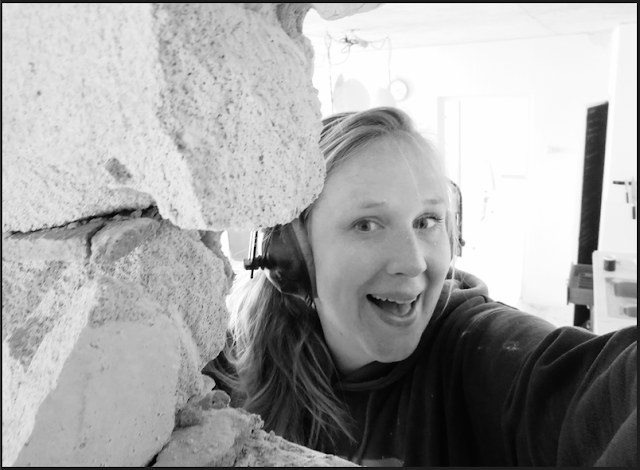 Joost woke up, looking not only bleary-eyed, but also slightly disturbed.  "You can't believe it" he sighed, "I even dreamt about dust!" "Ouch..." I sighed, "I think all the home-improvement has gotten into your head."

I myself also experienced something like that. Only a few weeks ago, around the time when we were replacing our kitchen floor,  I had this very vivid dream where I was attending the Olympic games to compete in the sport of.... laying floors...
yeah.. that was exactly as is sounds: we had to line up at the start line with a big pile of wood, and lay the flooring as fast as I could.  The bends were a little tricky, but... I was incredibly fast, laminating the floor where later that day Usain Bolt would work his magic,  and... I won the race! .... Only to discover that I also had to build my own podium.
... Yeah, really, it was that kind of dream.


My point being: Renovating your house gets you in ways I never had imagined possible. And it's not just dreams only: it has also opened a whole new world of hypochondria for me as well. I mean, who could have imagined the:

It's incredible and wonderful at the same time! But wait, let's get back to why Joost dreamt about dust.

Well, I will tell you why.


Despite all those lovely and very stylish pictures I showed you of our kitchen, the place  wasn't exactly picture-perfect from all points of view. One wall for, for example, was looking like this:


Since the first time that we saw the house, we dreamt about knocking that wall down to create a bit more of an open space living. But in the first few months, other projects preoccupied us, and we hadn't really gotten around to doing anything with it.
But after we removed that big sideboard to make a much airier version, we were suddenly left with a very ugly, very unfinished concrete wall.

So, last saturday, I had my well-known home-improvement itch, and told Joost: let's knock down that wall! "Well, I got to go to football in an hour... " Joost hesitated. Well, okay, hun, you go kick some ball, while I knock down a wall!

So, I cued the music, covered the floor with a lot of underfloor panels and old curtains and grabbed my hydraulic hammer. And started hammering.  And... Hammering... aaand hammering... until I got this!


Wall demolition may be hard work, but it is also brilliantly satisfying. I had a lot of fun!


One unfortunate aspect of my antics was the dust that was gathering... everywhere. So, when Joost arrived home from his football match, he kind of had to swim through the dust towards me. And while I was quite excited, he was slightly less so. Glancing around, he muttered something like: "why don't we live in America where all walls are made of cardboard?" (sorry Americans)

ah... I should have known... the manfriend is allergic to dust and messy rooms.. But, the rest of the afternoon he did help me tearing down the rest of the wall, and after a good three hours of cleaning, we went to bed, Joost still muttering about the dust.. (grumbl, grumbl..)

Which might explain why he woke up so disturbed the next morning ;) But after a goof few cups of coffee, we got back to work again, not only removing the last bits and pieces of concrete wall, but also attacking the remaining bits of that horrible (grrrrrr) styrofoam ceiling.

And the rest of the weekend we could enjoy for the very first time our open plan living! It's so light!

Of course, it isn't finished yet. I recently scored some very awesome and very old sliding doors online that go in between kitchen and living room so we can divide the rooms whenever we want to.

Oh of course you want to know what it looks like now!

( I just realized I left my camera at work today, so I had to rush around with my laptop taking pictures with the webcam to show you the results, sorry for the quality, or the lack thereof!)

The living room still needs a LOT of work, on the ceiling, walls, fireplace and interior.
But for now, it's okay enough! In fact, this is the first time since we moved in that it sort of looks like a living room instead of a tool-shed, since that was how we used it for the last few months..


Joost has been very busy on removing more than a hundred years of paint from our sliding doors, so hopefully I can keep you updated on the rest of project kitchen/living room soon!

Has renovation ever gotten into your head? Exciting demolition stories? Or have you been creative in any other way lately? I'd love to know!

Posted by adventures of making at 10:39 PM