picture-perfect is just another word for boring || sideboard becomes bench

uhg, I feel guilty for leaving you alone! There were probably some very good reasons for not finding the time to write some blogs, but I can't remember them at the moment, so I just feel guilty. So guilty, that I actually gave up my little lunchtime-stroll to write you the long-promised post about my little bench!

Remember how I told you about how I upcycled one of the sideboards that was left in our kitchen?  Well, that was not the only sideboard left behind by the previous owners. Enter sideboard number two:

That first sideboard may have been a nightmare to remove, but this one was even worse. It was attached to the wall with a thousand screws, and I literally had to break it in pieces to remove it from the wall.

So, when I finally freed it from it's original place, it wasn't all too swell looking:


Then, when I took a closer look at it, I realized why -despite my not so subtle treatment- the outer shape was still intact: it had an iron frame hidden underneath!

Why someone would use an iron framework for a simple sideboard is beyond me: either they were fervent diy'ers, just working with what they had at hand ( that's my people!) , or they had housed a good bunch of monkeys/hooligans/mini-ponies.

Anyway: while turning this battered thing into a sideboard again was out of the question, the sturdy iron frame gave me another, even better idea: a bench!

I began by simply removing all the pieces of wood from the sides, front and top, so I was left with aforementioned iron frame ( which looked like it was once some sort of side-table) with a wooden top ( which was very ugly looking, as the finishing layer of wood was lost in battle)


From that point: turning the sideboard into a basic shape of bench was very easy: while Joost fired up the barbecue, I simply took my iron saw, and shortened all the legs:


so, the rest of that evening of roasting bread on sticks above the fire, and eating watermelon, making jokes while half of the burgers got devoured by the flames, and the other half got lukewarm at best ( it's on evenings like those that I am very happy with my vegetarianism..)

The next day, I decided to coat the entire bench with a tar-like paint to make it weather-proof ( some other kind of paint would probably also do the trick, but this was what I had at hand)


Now the bench just needed a good bit of pillows! As it was waaaay too hot to sew inside, I quickly installed my sewing machine outside.


For the seating cushion, I used some insulation fabric-thingies that we found when we removed the lowered ceiling from our kitchen (it looked like the stuff you put in your range hood, and I have absolutely no idea why it was hidden beneath our lowered ceiling! )

And covered them with the fabric of some curtains I bought at the thrift shop for 1 euro a pop.


So now, the bench was fairly ready to sit on...

Well, that better looking terrace needs to wait a bit, but the added comfort was easy to take care of!

I quickly sewed some pillow covers, and made pillows from the scraps that were left-over after making the seating cushion.

And we're done for now!
I'm planning to add a back rest when I've got the time, but for now I'm fairly happy with how everything turned out. 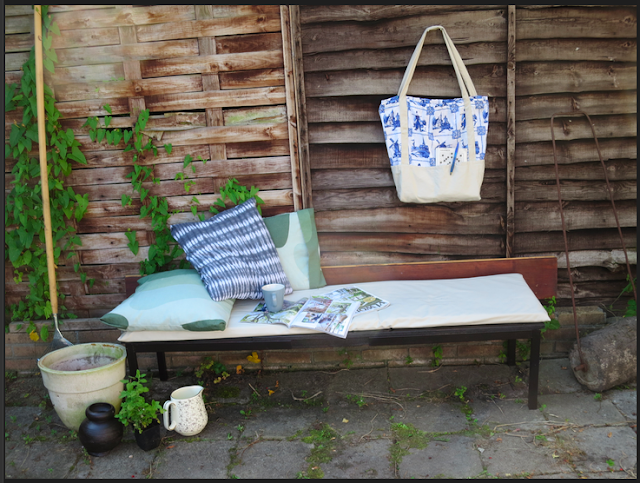 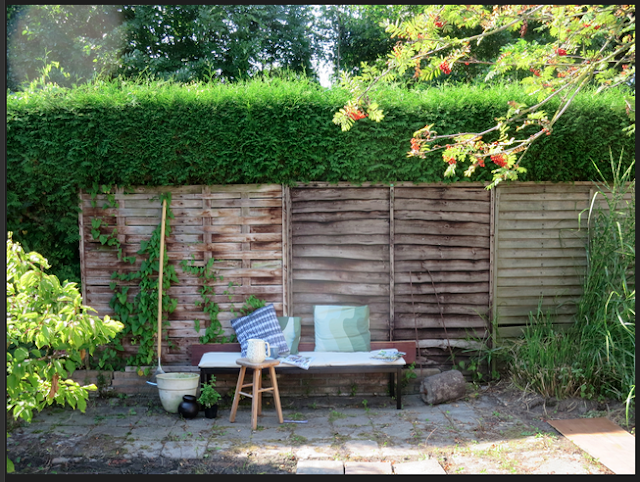 And despite the fact that indeed, the terrace looks bad, is covered in weeds en needs an update, I still had a lovely weekend over there, dozing and reading in the sun. Hope you're enjoying the amazing weather as well?

hugs!
BewarenBewaren
Posted by adventures of making at 12:22 PM