Cant ignore the past: the upcycled sideboard.


"You're probably going to get rid of that sideboard, aren't you?" the son of the previous owner of our house asked when he stopped by for a cup of coffee.
"Well.. yeah, I think so, it is pretty ugly.." I replied hesitantly.
" I can imagine, it's a bit outdated", he said, but then added "Did you know my father gave that to my mother? It was specially designed for them, they were so proud of it."

Wait, of course you don't know what kind of sideboard I'm talking about! Well, hold on to your chair 'cause here it is!

Yes, you may now all tell me I'm a despicable person for making such a mess, even during a renovation.
But besides that, what is to say about that sideboard?

Well, It was huge. Yuuuuge. It was so big that the laminate floor was actually build around it. Also I had this weird asymmetrical shape. I know that shape was fashionable during the sixties, but I think that was mainly because everyone was munching the wrong kind of mushrooms, and wasn't capable of making considerate design decisions anyway.

But is was also really well-build, and most importantly, it had been loved by it's previous owner, which was why I decided to upcycle it.

So I sat down, grabbed some tea, and made a plan.


As you may have deciphered from my blueprint, the plan of action was to:

So I started by cutting the top and side part off, as was shown in the drawing.

The whole thing was actually so big, That I needed to saw some parts off before I could move the whole thing. But when I did... look what I found underneath it: about 40 years of treasures!

In order to avoid gathering yet another 40 years of treasures underneath the sideboard (and well, also because I like it) I decided the sideboard would need some legs..

So, I took some leftover beam from when we made the kitchen...


Then the best part of the whole process: paint!!

And this is the finished product!! 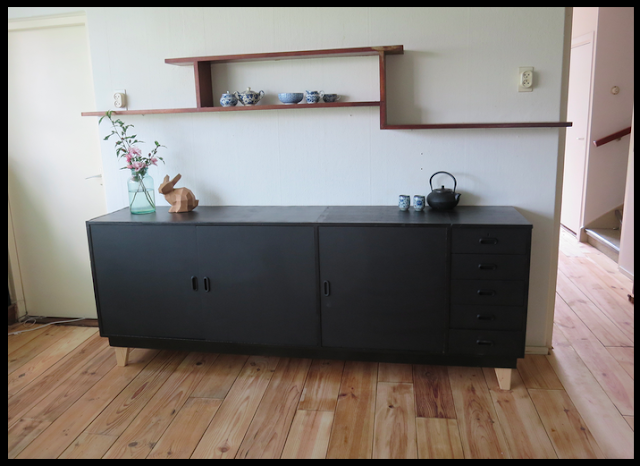 Although at some times I fear it is still a bit too big and too dark, I really have fallen in love with the simplistic, natural look of this sideboard. And this I used the same paint as I did on our kitchen (this one!) It matches the rest of the kitchen pretty well.

I dislike those shelves above it though, so as soon as I have retrieved my crowbar, those things will be flying out of the window, and replaced by a nice big painting or something alike, which I hope balances the size of the sideboard a bit.

costs of the project:

- one bucket of paint: 17,-
Since the rest was all made from leftovers, the total cost of this project is a whopping 17 euros!

So, good save or did I get carried away by the history of the sideboard? Love to hear from you!

Ps: it has nothing to do with this post but I just had to tell you: my second cousin just got a bronze medal on the olympics! so proud! 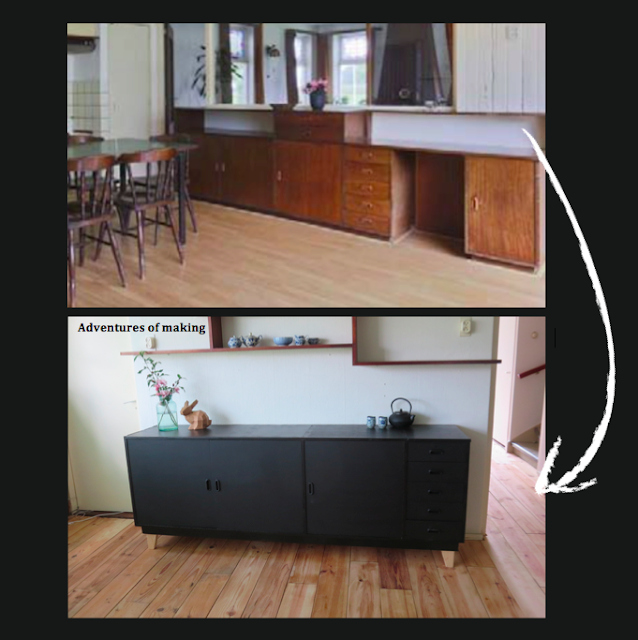 Posted by adventures of making at 7:40 PM