a prehistoric gift for a new generation. 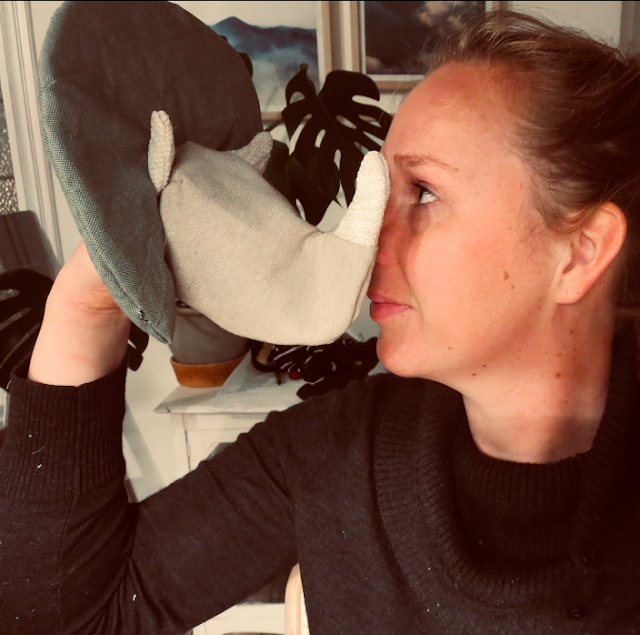 While I think my current career suits me quite nicely, I don't think anyone would have guessed that I'd grow up to be a bioethicist. What my parents did think I might grow up to be (beside superballerina-princess, which sadly doesn't really count as a realistic career) was: a paleontologist.
It is perhaps a slightly unexpected future for a young child, but I was absolutely fascinated by fossils. And the funny thing is; I was not the only one.
Somewhere, several kilometers away, Joost's parents must have thought exactly the same thing as mine: "That kid is probably going work with dinosaurs when he grows up."
While I spend endless summers sifting through pebbles in French creeks, collecting prehistoric leftovers, hoping to find new and exciting fossils, Joost was dragging his mum through dinosaur-expositions, and learning the difference between Jurrasic and Cretaceous creatures.
Our fossil-hunting/dino-spotting days are sadly over, and neither of us became paleontologist, but in essence we still are those children: a girl with an endless amount of fossils, and a boy who knows all the weird facts about dinosaurs.
So, when Joost's sis announced that our youngest niece had been born, we decided to celebrate it in a way that suited who we are: prehistoric style! And what better way to do it than by making a dinosaur-toy?
The hardest part came first: deciding on a dinosaur. After a lengthy discussion about the most aesthetically pleasing dinosaurs, and their merits when it comes to turning them into toys, we decided on a triceratops. Because: well, it has horns -which is cool- and it's chunky, which I hoped was easy to make ( at least easier than a pterodactyl, with all those weird angles)
the making of the triceratops.
I took some pattern paper, and simply started sketching!  The most important thing was to keep in mind that the shape had to become 3-dimensional, which meant making everything nice and chunky, as not to end up with spindly legs, and a generally underfed dino, and thinking about a shapes to fill the underside ( I didn't cut one out yet, but made one later in the process.)
I then gathered all my remnant fabrics from the back of my closet ( a beige piece of linnen curtain, a snippet of couch-cushion, and a snippet of green of unknown heritage)
I decided to start with the head, so that if it turned out terrible, I had least would know it as soon as possible. I sewed two horn-pieces to the head, stitched around the edges, but left the neck open, and added two darts from the neck towards the eyes, to give it all a bit of shape.
Weirdly enough, it looked really quite good, and dino-like!
As a triceratops is not complete without that neck-collar-frill-thing( that's probably the scientific name, don't judge) I quickly cut out the shape out of the rough outline out of green fabric,  making sure the neck opening sort of matched the opening of the head.  I also cut out a layer of padding (a throw pillow may have been sacrificed in this process) ,
some whirrrs later and…
I was genuinly quite shocked how quickly it started to resemble a triceratops! I sewed the bits together with double rows of stitching, to make it child proof…
Onto the body! I sewed the back and tail, which was pretty straight-forward, and attached the head.
If I had stuck to my original plan, of making a plushy, the finishing would have been quite straightforward: adding an underbelly, and stuffing it. But my mind raced: what would be cooler than a dinosaur to cuddle with? A dinosaur to ride on, of course!! How hard could it be….?
measuring the length of my dino's back, I cut out a back from a piece of left-over 2by4. Then I added four legs (pre-drilling all the holes, and using extra long screws for sturdiness)

After some rigorous testing, I decided it should be sturdy enough for a kid, or even a small adult.

I pushed the frame into the dino's belly...

And added lot's of stuffing around it, so all would be nice and soft. 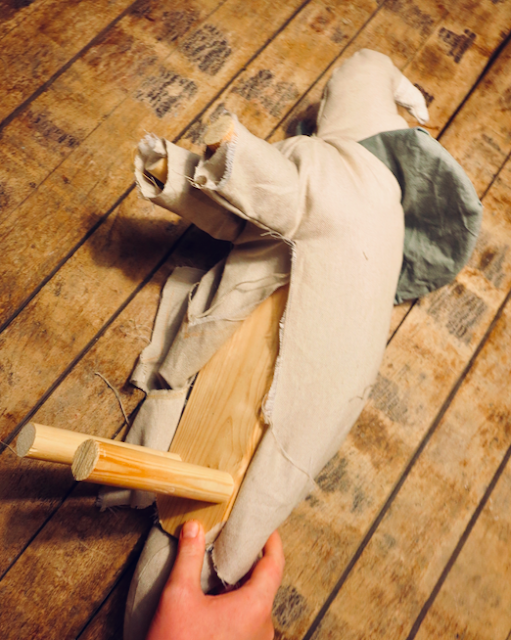 Then I cut a shape to close the underbelly and inside legs ( which isn't very visibly in the photo above but it basically looked like a big H ) and sewed everything together by hand.
Of course" if my niece want's to ride on it in the future, she's gotta have some wheels! So, I added a  wooden base, screwed tightly into the wooden legs of our little dino..
( by now, it was around midnight, and I was using our jigsaw and screwdriver in our brand-new kitchen, sorry Joost…)
finally, I added small cart-wheels, and gave Trixie the triceratops a wee lil' smiling face with embroidery stitches.
A drawstring so her mum and dad can pull her along, and we're done!!

I mean: I'd happily have that in our own house, even though we don't have kids ( maybe I should make another one: adult sized, and from now one take all my video-conference calls while sitting astride a giant Trixie!!)

While it will be a while before my youngest nice will take Trixie the triceratops on adventures, I hope her bigger sister will take good care of Trixie in the mean time.
It was of course a bit weird, visiting the newborn without being able to hold her, but it was really nice seeing her, her mum and dad, and her big sister ( with whom I had an awesome socially distanced play-doh-session) 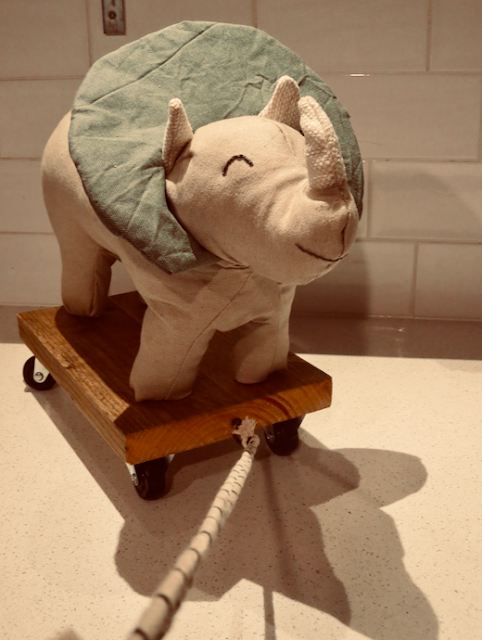 hugs!
Posted by adventures of making at 10:37 PM