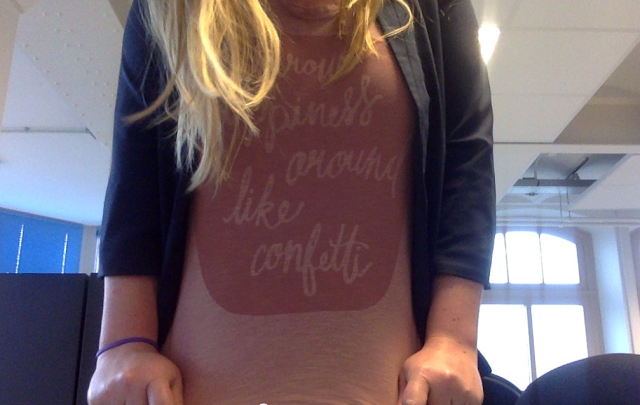 I sighed. The office was empty, which was a good thing, since if I was throwing things around, it certainly wasn't happiness.
"Damn shirt" I mumbled. "keep your damned happiness to yourself"
Why? because I wasn't very happy.

I know, I know... Some of you may be sighing right now, and think something like " Oh no, don't let this be a whiny, depressing post from some depressed writer!" And I completely get you for thinking that.

But I'm not always happy, that's just not the kind of person that I am.

My happy side is quite a big part of me. But so are my insecurities, fears, occasional blue moods, and my nervous tics. I don't think of that as very strange: that's what makes me a person rather than a mask. (Except maybe for those nervous tics, those are quite strange to be honest)

And I know that not all of you are happy all the time.


But we just don't like that part of each other, do we?

Like the t-shirt we rather shout at each other something like: Hey, stop being down, and throw some frikkin' happiness around!
But I (with absolutely no psychological knowledge, and merely my own experience as evidence) like to send another message:  Please don't. As long as it is within limits, it is a part of us, and it doesn't make you less worth ( I'm writing this to convince myself just as much as you, you see)
Ignoring it won't help you through it, it will just make you a very good pretender at best.

So, to set another example from all the cheery, happy people you'll find online, I'll confess:
I'm not completely "fine" at the moment.  I've been quite overworked, I worry about fitting in at work, and I worry that we'll never finish the house, and I'll get down because of the heavy topic of my research (which is about children in the terminal phase). But even though I'll need to work on that, I'm still me.


Haha, okay, no let's not do that. I still love that shirt, and there is still a lot of happiness to throw around in my life, even if the balance is not entirely the way I like it :)

But to show you that though periods can be very, very useful, I'd like to show you some work from when I started refashioning. Because that was in a period when I also wasn't the most enjoyable company to have around. I had a burn-out.


It was in that time that a befriended owner of a shop asked me and my mother if we wanted to design refashioned clothes for her shop. Her shop was linked to the salvastion army, and we would receive second handed clothes, and turn them into something new and wearable.


I had never heard of refashioning before, but it sounded exciting.
And as it turned out, it not only just what I needed, but also something that I probably wouldn't have discovered without the burnout.


"whew", I thought when she first asked us. "That's really cool, but I'll never be able to do that" But having paused my studies for a few months, I had the time. And from its hiding place, my sewing machine kept lurking at me..

And lurking.. and lurking.. Until finally, I picked it up, placed it in front of me and thought a while about what I should make.

I stared at the machine and I couldn't think of something, so instead I just ran through some of the second hand clothes. And by letting them glide through my hands, ideas began to form. And without really thinking about it, I started drawing. And cutting. And sewing. And for the first time in a long while, I really made something again.

This isn't a fairy tale: so this isn't about how sewing saved my life and made all my stress melt away like snow in the sun. It didn't: that took quite a few months, and a lot of effort. But it did help: and more importantly: looking back, I don't see that the period of the burn out as bad, but as a period where I learned to take my life into a different direction, something I wouldn't have done if I simply had been happy all the time.


And most of all: I can look back at many cool things I've made in that period!